Read more
You are at:Home»Culture»Review: Little Shop of Horrors at the Pavillion Theatre, Bournemouth
By Carly-May Kavanagh on August 12, 2016 Culture, Theatre
80%
80
Fantastic

I don’t think I’ve ever been as excited to watch anything on stage as I was for Little Shop of Horrors. Performed by Sell a Door Theatre Company, with the addition of The X Factor‘s Rhydian Roberts, the cult classic was promised to me by the co-producer to be ‘a faithful performance, with any previous expectations blown out of the water’. 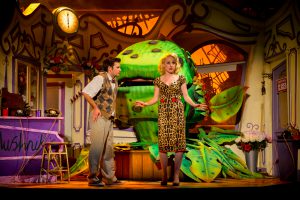 The acting and singing were flawless. I can’t fault anyone on it, because it was all just simply perfect. Rhydian’s dentist really was quite incredible, and he nailed ‘Dentist!’. Having been told by him during our interview (to be published soon!) that he had six roles plus the dentist (one of which was given to him on Thursday), I wondered if he’d handle it well. However, even the long operatic note towards the end of his song (because come on, they had to!) was perfectly in character, with Orin Scrivello D.D.S. checking his teeth in a dentist’s mirror. He got the mix of sadist and genius perfect, and completely got into the character – I fully believed that he was a deranged man who enjoyed inflicting pain on others, and saw himself as a rock star.

I liked how they did the music, having been unaware that it would be the Broadway songs as well as the film songs. The music is so feel good, and the juxtaposition of the sound with the story works so well. A Disney-esque vibe is felt – which is to be expected as composer Alan Menken went on to write music for The Little Mermaid and The Hunchback of Notre Dame. ‘Now It’s Just The Gas’ and ‘Call Back In The Morning’ were highlights, and I particularly liked the choreography of the latter; tying Seymour (Sam Lupton) and Audrey (Stephanie Clift) together with the telephone lines. On that note however, my only slight criticism has to be that the romance between the two was pushed just a little too much. We all knew they loved each other from the outset, but obviously this is theatre and certain elements will be exaggerated. It definitely didn’t detract from the performance! 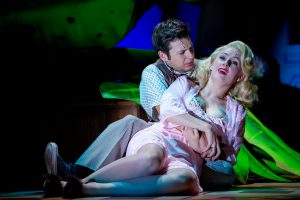 Stephanie Clift was a remarkable Audrey, and I absolutely adored her rendition of ‘Somewhere That’s Green’. The timidness of her character so clearly melted away into nothing as she daydreamed of her future, and her voice was just incredible. The technical ambition of the company was fantastic, with animations onscreen behind Audrey showing childlike fantasies of her ideal life. Her final scene was so well acted, that the second the notes of ‘Somewhere That’s Green’ started playing I started tearing up – which wasn’t helped by her request to Seymour and finally being ‘somewhere that’s green’. Absolutely stunning, and the highlight of the night.

The set was a literal work of art, and the simplicity of it all worked incredibly well. Nothing had to be moved on or off because everything took place in the dentist’s, the florist’s, or in front of them both on stage (used as different locations). They even had a music shop to the right hand side where the band sat: it was very well thought out. Even the flashing lights through the windows on a dark stage were amazing, and I could write for hours about the symbolism and how it made everything look evil and haunted. The newspaper stand to the side of the stage with changing headlines that followed the story was also a nice touch – featuring headlines that could have feasibly been on a paper in Skid Row. It’s clear how much work the set designers and producers put into it.

Even the ‘small’ parts and little details were very well thought out. The urchins were sassy and fun, with Cassie Clare being my absolute favourite – I promise you, it was a tough decision, but her voice and expressions were absolutely outstanding. The details that went into the costumes of the show, with the urchins always having green clothing somewhere on them, and the cast wearing their own outfits in green at the end (you’ll understand how cool it is if you know the story!), was fantastic. And of course, a special mention goes to Mr Mushnik (Paul Kissaun) for his dad dancing in the back for one of the songs.

Little Shop of Horrors is on at the Pavillion Theatre in Bournemouth from now until the 13th and then touring across the UK until November 26th. More details can be found here and here.