Read more
You are at:Home»Culture»Review: Cats at The Mayflower Theatre
By Megan Isaac on August 12, 2016 Culture, Theatre
80%
80
Spectacular

CATS the musical puts on a spectacular show which will leave you feline good.

The latest run of the time-honoured musical Cats at Southampton’s Mayflower theatre has proven to be as popular as ever, and with merit.

The nationwide UK tour of the iconic show combines the now classic story, with a bright and talented cast and intimate staging to great success and much acclaim. Andrew Lloyd Webber’s Cats is one of the most popular British musicals, and has run continuously ever since its first performance on the West End in 1981.

Cats tells the story of the Jellicle tribe on the night of the Jellicle moon, whereby the leader of the tribe will select one cat to be reborn to a new Jellicle life. Despite boasting no big name star, as previous Broadway and West end productions of the show have done, the Southampton leg of the shows tour seems to have proven popular with audiences, with almost all tickets being sold.

However, the cast of the current stage production have proven to be both accomplished singers, and skilled actors. Particular praise should be reserved for Marianne Benedict who played the iconic role of Grizabella, a former glamorous cat who has now become an outcast amongst the tribe. Benedict’s rendition of ‘Memory’ demonstrated her superb vocal range and was so emotive that it moved some in the audience to tears. 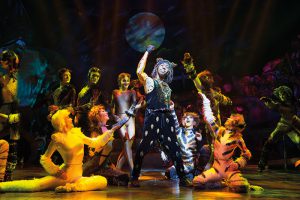 Another star of the current production is Marcquelle Ward, whose updated role as Rum Tum Tugger, sees an urban interpretation of the character delivering a rap in the first half of the performance. Though this may not have proved popular with traditionalists, or die-hard fans of the musical, for the open minded it was very entertaining and lightened the mood of what is at times a very dark show. Shiv Rabheru’s performance as Mistoffelees also proved to be a highlight of the night; not only does Rabheru undoubtedly have the best costume of the entire cast (bedecked almost entirely in diamantes), he is also a highly talented and effervescent dancer.

All of the cast have clearly made efforts to mimic as many feline characteristics as possible, resulting in a show that often makes you forget that the actors are people rather than cats at all. Though the touring performances of Cats have undoubtedly been adapted to suit smaller and more intimate venues (compared to those of the West End or Broadway), as an audience member you are not made to feel that this has compromised the production values of the show at all. Both the set and particularly the lighting – where set designers had strung fairy lights throughout the theatre – added real depth and ambiance to what was happening on the stage. Credit also has to be given to the orchestra, who consummately delivered the iconic soundtrack throughout.

Overall, there is little that can be detracted from the joys of this latest leg of Cats. The show embraces the limitations of a smaller theatre and makes the show intimate on a positive level – with the cast often descending into the audience, only heightening your enjoyment of the performance. There’s no doubt about it; Cats is an enjoyable night out that will definitely leave you feline good.

Cats is set to run at the Mayflower Theatre, Southampton until 20th August 2016. You can buy tickets here.