Read more
You are at:Home»Culture»Why Brooklyn Nine-Nine is my happy place
By Rehana Nurmahi on August 11, 2016 Culture, Television

Aah, summer: that time when we rewatch our favourite TV show for what seems like the millionth time… Recently, I have been revisiting the Fox sitcom Brooklyn Nine-Nine. The comedy show is a police sitcom set in the 99th precinct of New York; following the core team of detectives as they go about their jobs. It is a show I revisit often, and has become to me an antidote for any sort of bad feeling. The show is one of my favourites on air right now, and as I await the fourth season, I figured it was a good time to share the things that make it so great – and the reasons you should jump on the bandwagon. These are my reasons why Brooklyn Nine-Nine is my happy place. 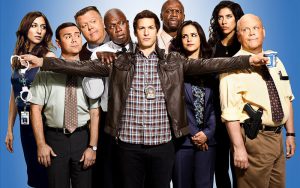 At the heart of any show, the thing that connects its audience to it, is the main cast of characters. This is one of many areas where B99 shines. Andy Samberg takes the lead in the series as Detective Jake Peralta; and even though he is the top billed actor, he is given equal attention amongst the eight other characters on the show. Every single one of these characters is interesting and likeable, and they are all given their moments to shine. Even Hitchcock and Scully, two pretty useless detectives outside of the main lineup, are provided with many amusing plotlines and laugh-out-loud moments. All the characters are inherently very different, and they still fit all the various television tropes – but it is done in a way that also seems to subvert them. For example, the ‘big muscly black man’ is also the sensitive one, and the gay man is also an emotional recluse.

Of the actors who appear in the title sequence, you have two Black men and two Latina woman. That is over half the predominant cast members made up of people of colour. This is something very rare within the industry, and the most wonderful part is that it’s never pointed out as abnormal. For a show set in modern day New York to have a main cast that was only made up of white people would be somewhat ridiculous, as it would in no way reflect what New York actually looks like everyday (here’s looking at you, Friends, HIMYM, Girls and so many more). As well as this, their ethnicities don’t define their characters. In fact, Holt’s defining attribute is more his homosexuality, rather than his skin colour- oh right, that too; an LGBT character in the main line up as well. Double whammy for these guys when it comes to representation! 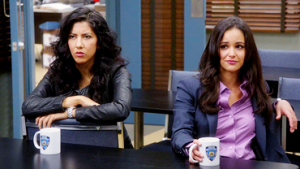 Even though it’s a cop show, there are a host of wonderful female characters too – and they are all completely different. There are three main female characters: Amy Santiago (Melissa Fumero), Rosa Diaz (Stephanie Beatriz) and Gina Linetti (Chelsea Peretti). Each of these women are strong in their own way, reflected in their extremely different personalities. Amy is academic and plays by the book, Rosa is the tough (and scarily) violent one, and Gina is the tech savvy #relevant one. None are portrayed as being better than the others, and it’s exciting to see women being shown without competition or rivalry between them. As Rosa says early on in the first season, “We work in a precinct full of dudes, we’ve got to have each others’ backs.” And they do. As well as this, they are all fully developed female characters, of which none are reduced to being just a romantic interest. Even Amy, who does eventually enter a relationship with protagonist Jake, is never just there for his sake. In Episode 5 of Season 3 Amy herself contests the notion.

Development of characters and relationships

Going back and watching the early episodes of the show is so bizarre, because the characters have all grown so much since then. Every single one has had a transition and has developed into a more complex, realised person. As someone who is a sucker for good character development, I have to say that this makes me beyond happy. Considering that the show is written and produced by the same team that did Parks and Recreation; this is no surprise, but still it brings me endless joy.

The main character Jake has gone through something of a transformation over the first three series of the show, and I’m so excited to see where he goes next. Starting in the pilot as a childish, immature, rule ignoring detective; he has gone from there and we have seen him become more selfless, more in touch with his emotions, and more mature with each passing episode. The effect that other characters have on him deeply changes him, and I think this is a real reflection of how relationships with our friends and family do change us. The father-son dynamic between Captain Holt (Andre Braugher) and Jake is wonderful, and as well as being funny, it becomes a very moving thing to see. 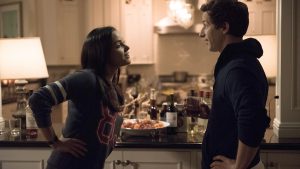 The romantic relationships are handled with such care and time, that they are in my opinion some of the most realistic and natural progressions of relationships on TV. I’m mainly talking the show’s main couple here – Jake and Amy. Jake and Amy are #relationshipgoals, and pretty much from the offset, you’re rooting for them to get together. However, the show never rushes things between them, and it’s all handled in a very adult way. The great thing is that even when Jake likes Amy, who is initially in another relationship, he never tries to stop her being with someone else. He never feels that he is entitled to her, or deserves to be in a relationship with her: he fully accepts her choices. I find this so refreshing! As much as big declarations of love and the ‘You belong with me’ scenarios of the world seem romantic, they can actually be really unfair to some of the people involved, and they perpetuate a culture that says that if you have feelings for someone, they have to like you back. Brooklyn Nine- Nine says no to that. It shows a healthy, understanding development from friendship to more. As well as this, when they are in a relationship it is handled well – their being in a relationship doesn’t become their only plot on the show.

The friendships on the show are also well presented, and again have a tendency to push away the tropes we are so used to seeing on television. For example, the character of Charles Boyle (Joe Lo Truglio) would most likely be ridiculed by the more masculine, ‘laddish’ protagonist on most sitcoms; however, Jake’s friendship with Charles is one of unwavering loyalty and dedication. The two characters – as different as they are – do really care about each other, and that is never shown as a weird thing. The chemistry between the actors on the show certainly helps their dynamics, and whatever characters are paired together in a scene – it will just work.

At the end of the day Brooklyn Nine- Nine is a comedy, and the purpose of a comedy is to make you laugh. B99 succeeds at that time and time again, and it never has to be offensive to do so either. The show is a barrel of laughs that never loses sight of the comic, even when more serious themes are covered. It gets the balance just right, so that the show can simultaneously have us sat on the edge of our seats and laughing too hard at the quips and one-liners pulling the narrative along. 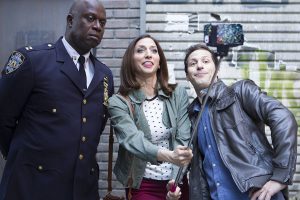 There are a host of hilarious guest stars too, that have all made the show so much fun. Special mention here to Kyra Sedgwick as Captain Wuntch, because her and Holt’s rivalry is an absolute highlight of the second season, and is the cause of many of the best scenes.

The show never takes itself too seriously, making for something that is so light and easy to watch absolutely whenever and in whatever mood. Each episode is only 20 minutes long also, which helps because you get through it quickly without even realising (I watched the first two seasons in 3 days).

I would encourage everyone to watch this wonderful show, because it has the ability to make even the coldest heart smile. It has a healing aura that brings joy, and makes me so happy that shows so simply fun and brilliant exist. The show is progressive in ways that are so subtle, and it deserves to be acknowledged and recognised for that. Brooklyn Nine- Nine is my happy place, and I hope it can become one of yours too.

Brooklyn Nine-Nine is back later this year with its fourth season. Watch the original trailer for the show below: