Channel 5's police drama certainly has its flaws, but the intriguing mystery and likeable characters make this programme worth investigating.

I came into the fifth series of Channel 5’s Suspects without having seen a single episode of the first four seasons. However, this didn’t prove to be a problem. The intriguing mystery and likeable main characters at the heart of this series instantly caught my attention.

Suspects is set in a London police station and follows a team of police officers tackling various murder cases. The series has been praised for its no-frills depiction of police investigations, rarely deviating to feature the private lives of the individual detectives. 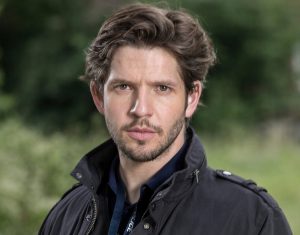 Luckily for me, the new season of Suspects acts as a soft reboot for the series. The main cast has received a serious shake up since the end of the last series. Additions include several new police officers who all receive a suitable introduction in the first episode. However, the biggest change is that previous main character, DI Martha Bellamy, is brutally murdered in the opening of the first episode.

The role of main character quickly falls to DS Jack Weston (Damien Molony). Like much of the new cast, Molony’s character comes across as exceedingly likeable. While not reinventing the loose cannon cop cliché, it is simply entertaining to watch Weston clashing with the straight-arrow members of the team while still getting results.

Suspects does an excellent job in creating an intriguing mystery that allows both the characters and the audience to become incredibly invested. Having the previous main character being the victim provides the returning cast with a real drive to solve the murder. In particular, Molony’s character is able to show some real emotion when first discovering that his former partner is dead.

There were also certain members of the supporting cast who really stood out. The young actress Alexa Davies excellently portrays Bellamy’s daughter. While somewhat underused, Davies did an incredible job at playing the grieving daughter; able to portray a huge range of emotions across the episode. 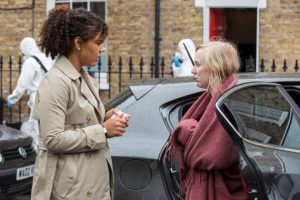 However, there are some problems with Suspects on a stylistic level. The constant use of shaky cameras and jarring cuts certainly begin to grate on viewers after a while. While these techniques can be useful in more action-oriented scenes, Suspects chooses to use them throughout. These choices can be defended by claiming the series is attempting to use a “fly on the wall” style. However, the camera wildly panning around while two characters are calmly talking at a desk is unnecessary and ultimately distracting.

The other way in which Suspects attempts to emulate real life can be equally distracting. Much of each episode’s dialogue is completely improvised by the actors in an attempt to seem more natural. For the majority of the episode, the improvised speech was largely unnoticeable. However, certain lines of dialogue from side characters come across as very clunky and clichéd. For example, the street thug Ajam’s dialogue featured some embarrassingly outdated and cliché slang terms which undermined the realism that the improvised style was trying to create. There are only so many times that a 21st century teenager can get away with calling someone “wicked”.

However, it would be wrong to say that this ruined Suspects for me. I wasn’t expecting to enjoy it as much as I did. And as this episode ended on a cliff-hanger, I will certainly be investigating Suspects again next week.

Suspects broadcasts on Wednesdays at 10pm on Channel 5.