We were told it would never come – but only nine years after the so-called ‘last’ Harry Potter story came out, tomorrow (31st July) the whole world gets access to the next chapter of the former boy wizard’s life. On her 51st birthday (and Harry’s 36th), J.K. Rowling is the one giving out the present; a gift to the world, in the form of the long-awaited eighth Potter story, Harry Potter and the Cursed Child.

Even now, hours before its public release, Potterheads across the globe will be queueing outside bookstores, dressed in long black wizarding robes, scars zig-zagged onto their foreheads, peering through fake round glasses in eager anticipation as they wait for the doors to open, so that they can finally get their hands on the ‘Special Rehearsal Edition Script’ of the story. (The first copy of The Cursed Child‘s theatrical script.) 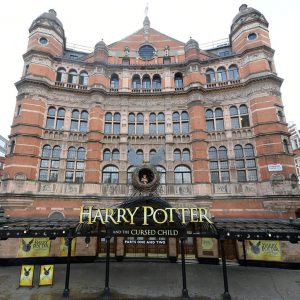 A luckier few, however, are in a different line – outside the Palace Theatre in London, waiting for the doors of the auditorium to open on the first proper performances of The Cursed Child. For this reason, I won’t be in the bookshop queue. I have a very frustrating, but exciting, wait ahead of me; one that will require extreme willpower, and precise skill at avoiding social media spoilers. But J.K. has always insisted that The Cursed Child is a stage play, first and foremost, so I will wait to see the magic unfold in the way she always intended it to.

Though, with a hugely long wait for theatre tickets and still a relatively expensive price tag (though cheap for theatre, with tickets starting at £30) – I don’t blame people for buying the script. Now seems like the perfect time to anticipate just what we want to see from this unique combination of theatre and literature that J.K. Rowling is gifting us with; measuring up what will make Harry’s return as magical as possible.

Though we all love the original heptalogy of Harry’s school years, this can’t just be an ode to the Harry Potter of old. That was one story, a whole chapter of Harry’s life, closed by the death of Lord Voldemort. For J.K. to bring Harry back for round two, she needs a compelling new part of Harry’s life to begin. 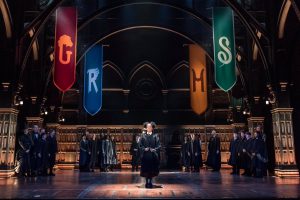 I want a new, complex villain; new heroes, even if it means pushing Harry more in the background; maybe even a couple of tragic deaths. As James and Lily proved, there’s nothing like a good ol’ murder to spice things up a bit. What I’m saying is, it’s not enough for Harry to face off with the reincarnated Lord Voldemort while his kids have a jolly old time at Hogwarts.

On a positive note, it’s great to see J.K. Rowling being realistic about Harry nineteen years on from the Second Wizarding War. The ‘All Was Well’ Epilogue at the end of Deathly Hallows was all nice and a fine conclusion to ‘Chapter One’; but ultimately, as the play’s official premise notes: “It’s never easy being Harry Potter.” Harry must “grapple with a past that refuses to stay where it belongs,” just like any other celebrity, or key figure in real history. What’s even more interesting will be how Albus, his youngest son, reacts to his father’s past: “Albus must struggle with the weight of a family legacy he never wanted.” Perhaps this is the true curse the title speaks of; with Albus being the eponymous child, purely because of the legend he feels he has to live up to. Though I would be very surprised if The Cursed Child is without a real curse as well, the dark side of J.K.’s Wizarding World has always been one of the story’s best features.

Harry Potter started its journey as a children’s book, and though it got progressively darker and has a huge fanbase of adults, it’s always stayed true to those roots. Because of this, J.K. has always wrestled with having to have characters described as either ‘good or evil’ – or should I say, ‘Gryffindor or Slytherin’. There are a few exceptions of course (Severus Snape), but I always struggled with the unrealistic divide in characters. How about some Death Eaters that question their moral stance? This is touched upon with Regulus Black briefly, but happens years before the main narrative and isn’t given much time to be fully explored. 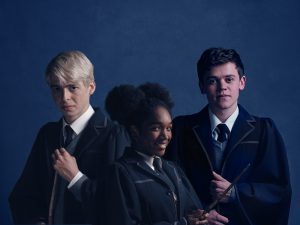 How about a Gryffindor/Slytherin relationship? Now this is something that really excites me, and I can actually see it happening. A popular fan theory has always been that Rose Weasley and Scorpius Malfoy (both confirmed to appear) could be a good pairing. Draco’s good side was again never given the depth it needed, so it would be great to see Scorpius, who everyone surely expects to be just like his father in the new tale, to break convention and become a proper hero. In contrast; how about turning Albus Potter bad? Though it would be a heart-wrenching twist that I’m not sure would go down so well with audiences, it could be a genius narrative move on J.K.’s part. Resentful of his famous father, Albus’ fear of being sorted in Slytherin is realised, and he is poisoned against his family. Unlikely, but if it were to happen, I’m sure someone with the writing calibre of Rowling could pull it off.

The Magic of the Theatre

J.K. Rowling has always been specific; The Cursed Child is a stage play for a reason. Though I want readers of the script to enjoy it, I think the magic has to be in the viewing – to see the likes of Jamie Parker, Paul Thornley and Noma Dumezweni slotting into their roles and wowing an audience with theatrical trickery. Done right, the stage is perhaps the most powerful medium to explore a story – just take adaptations of books, such as The Curious Incident of the Dog in the Night-Time, which has blown the minds of audiences in a way a book just can’t.

This is why I’m waiting to lose my Cursed Child v-card until 5th October, when I make the trip to the Palace Theatre to watch the play in all its glory. If any of you have tickets, I’d encourage you to do the same. And as J.K. Rowling has begged; please, please – #KeeptheSecrets.

The play, which has been previewing since June, will start its proper run imminently and continue at the Palace Theatre for the foreseeable future. For more information, visit the website.