Read more
You are at:Home»Culture»Actor in Focus: Kevin Spacey
By Hollie Geraghty on July 27, 2016 Culture, Television

Kevin Spacey is universally praised for his impressive performances in feature film roles such as American Beauty, L.A. Confidential and The Usual Suspects. He has won two Oscars and has been nominated for numerous other awards, but where Spacey has really shone recently is in his role as Frank Underwood, in the Netflix series House of Cards. 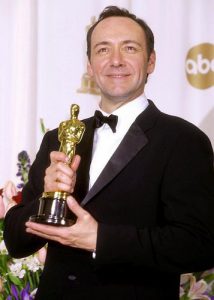 Kevin Spacey with his Oscar for American Beauty. Image via pinterest.com

However, this is not Spacey’s first performance outside of the film industry. His first stage appearance was a minor role during the New York Shakespeare Festival, in a 1981 performance of Henry VI, Part 1. He went on to appear in various productions including Ghosts, The Misanthrope, and Hurlyburly. His career as a prominent stage actor began in 1986 when he was cast in Jonathan Miller’s production of Eugene O’Neill’s Long Day’s Journey into Night. Spacey then went on to make his first major television appearance in the second season of Crime Story, where he played an American Senator. He continued to be actively involved in the theatre community, although his interest soon turned to film.

Following an incredibly successful film career, Spacey returned to his roots as he began his role in House of Cards. House of Cards amazed audiences everywhere – this was an incredibly gripping and unique show right from the onset. Spacey and co-star Robin Wright possess an electric chemistry which attracted huge audiences, and had us hooked instantly. 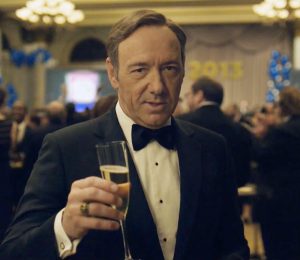 Kevin Spacey as Frank Underwood in House of Cards. Image via broadwayworld.com

Spacey’s performance in House of Cards is incredibly unique, and it is difficult to find another performance which is of the same standard in believability and authenticity. Spacey plays Senator, later Vice President, and eventually President, Frank Underwood. The premise of the series is simple to begin with: Congressman Underwood attempts to exact revenge on those who betrayed him. However, it becomes so much more than this.

Not only does House of Cards have a fantastic narrative, but it really is driven by the show’s incredible actors and characters. Kevin Spacey is the most deserving of praise. He is simply mesmerising on screen as Frank Underwood. Cunning, manipulative and hopelessly charming, Spacey’s flawless performance makes it hard to imagine anyone else in a role, which he has personally crafted and perfected. His performance in House of Cards highlights how a predominately film based actor can bring can bring the same level of intensity, expertise and flair to a TV show.

Watching Kevin Spacey in House of Cards is like watching a real president in action. Although he is not depicting a real person (though some suggest Underwood was inspired by Richard Nixon), Spacey must surely be remembered as the most convincing actor to have played a US president in the history of television and film. Spacey is simply mesmerizing in the role; even after the peak of his career, he was able to rise even higher than before, breathing new life into a television career which appeared to have finished.

House of Cards will return for a fifth season in 2017.