Pokémon Go has incredible potential, but its many shortcomings can put a dampener on the overall experience.

It is undeniable that Pokémon Go has been a smash hit for Nintendo, The Pokémon Company, and its developer Niantic. The new smartphone app has quickly risen to the top of App Store ‘Most Downloaded’ charts across the world, and it is impossible to avoid the game’s impact when simply walking around the streets. However, the game is far from perfect and its many shortcomings ought to be addressed. 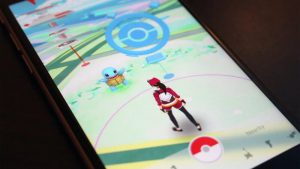 The game’s concept is certainly extraordinary. Using your phone’s camera and GPS, Pokémon Go makes the collectable creatures appear in the real world. The app displays a simplified map of your surroundings as you walk around and then vibrates when a Pokémon appears nearby. By tapping the creature on the map a Pokémon battle will begin. The game then uses the phone’s camera to make that Pokémon appear in front of you. The player’s goal is then to catch the Pokémon by throwing Poké Balls and adding it to their collection of virtual monsters.

Surprisingly, this ambitious concept has been executed rather well by the game’s relatively small developer Niantic. While many of the features of the original Game Boy Pokémon games have been simplified for the new app, Pokemon Go’s gameplay is largely able to successfully capture the spirit of the main RPG series. The battling system for capturing Pokémon has practically been removed; Niantic have streamlined it into simply flicking a Poké Ball at the monster. By simplifying the core game to such an extent, Pokémon Go is much better suited to the fast paced gameplay mobile games are known for. This must be understood when playing Go, as it never reaches the deep levels of turn-based gameplay that the main series RPGs focus on.

In a similar way, Niantic cleverly chose to only feature the original generation of 151 Pokémon, from the game’s release back in 1996. Some hardcore fans may lament the loss of their favourite monsters from the later generations of Pokémon; with notable losses including my favourite Pokémon, Rayquaza. However, the original 151 creatures are much better at evoking a casual or lapsed fan’s nostalgia. Nostalgia is central to why Pokémon Go is such a phenomenon at the moment, the innovative gameplay only aiding the fact that people love Pokémon.

Added to this, the original 151 have never looked better than they do in Go. Each Pokémon’s model excellently recreates the cartoony pixel graphics of the original games, while appearing clean and well defined. One complaint I’ve heard is that all the monsters retain their dated digital cry sounds from the Game Boy games. However, I believe this nod to the game’s origins only adds to the nostalgic charm Pokémon Go has. 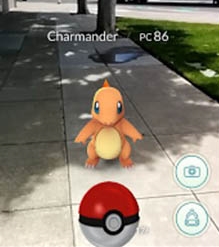 On paper, Go sounds like a dream come true, but many technical difficulties and shortcomings prevent Pokémon Go from truly placing its players into the shoes of a Pokémon trainer, with the most notable bug being the many server problems that have plagued the game since its release. When opening the app, it is always a mystery as to whether the game will actually load. In my experience, Pokémon Go fails to open about two thirds of the time. While others may have been luckier, I know many people who have had their Pokémon journeys cut short by frustrations with the game’s overloaded servers.  However, this is an issue which I expect to be resolved in the coming weeks as the initial strain of the game’s massive launch slows down.

More problematic are some of the shortcomings in Go’s gameplay. While the systems for capturing Pokémon have been cleverly translated to the world of mobile gaming, other aspects of the original games are noticeably missing or poorly recreated. One of the greatest aspects of the original Pokémon series was being able to trade your digital monsters with friends, helping them to complete their collection. This is a feature sorely missed in Go. While I may have caught a couple of Abra, I am unable to trade one to my friend who has yet to find one. It is strange that this central aspect of the series would be missed, seeing as it is such a large part of the franchise. I can only assume that they will add it in a future update, with expansions to the game being promised.

While battling in Pokémon Gyms is an element of the original games featured in Go, the way in which it has been implemented in the real world leaves much to be desired. Battling, which in the RPGs is a deep strategic affair, has been reduced to frantic screen tapping – in what feels like a completely luck based fight. Unlike trading, this is a feature which should have been left to a future update, in order to ensure that the gameplay feels as satisfying and rewarding as the rest of Pokémon Go.

The final problem, which only affects those living in smaller towns or rural areas, is the lack of PokéStops and Gyms. Across the map, Pokémon Go sets noteworthy locations as PokéStops and Gyms. These can include statues, churches or even pubs. Visiting these sites allows the player to obtain special items or battle other players. When the game first launched, I was lucky enough to be on a trip to Washington D.C, where there were PokéStops on practically every corner. However, since returning home I am struggling to find many locations. This means my supply of items drains more quickly here, forcing me to use in-app purchases to continue to play. This is an issue which gives a serious advantage to those living in more populated areas, and seems majorly unfair.

On a purely conceptual level, Pokémon Go could be one of the best experiences in mobile gaming. Living in the Pokémon world was my childhood dream and many other’s too, back in the late 1990s. To some extent Go succeeds in making that dream a reality. Discovering a Gastly in my garage or a Raticate outside Tesco was an amazing experience. However, many of the apps shortcomings prevent it from truly living up to its potential. Hopefully, in the coming weeks, Niantic will address many of the criticisms raised with the game. With a few minor tweaks, Pokémon Go has the potential to be incredible – but at the moment, it isn’t quite there yet.

Pokémon Go is available now on iOS and Android devices.