Read more
You are at:Home»Culture»Actor in Focus: Evan Peters
By Tash Williamson on July 22, 2016 Culture, Television

Before he went silver for his role in the new X Men movies, Evan Peters already had quite the well-established career, as a star in the revolutionary American Horror Story. Despite my feelings toward the show and its decline over the seasons, AHS has given us the gift of Jessica Lange for those of us who were not alive in the 70s, appearances from the likes of Stevie Nicks, the soaring beauty of Liz Taylor as embodied by the welcome recurrence of Denis O’Hare – but most of all, Evan Peters.

Although in his other works Evan Peters has been shortchanged into the usual roles gifted (or cursed) to any of those with a youthful appearance at his not so tender age of 29, AHS has given us the gift of Peters’ versatility and growing talent. He is continuously challenged by AHS’ resident cast, with unique story lines that allow Peters to embrace his affinity with monsters.

His AHS career has been one of the most diverse the show has seen, playing roles from Frankenstein’s monster to mass murderer, and, as one of the longest running stars, the demands of the show and its ephemeral themes have never eluded him. Breadth of age and character has revealed his flexibility whilst showcasing his attention to detail for each of the complex creations: the physicality of Kyle and James March; the passion of Kit Walker and circus freak Jimmy; the humanity and weakness behind Tate Langdon, his first and most controversial role. He lives and breathes each time and space, fitting comfortably within the modern seasons as well as those filmed in a different period; an immersive experience for both actor and spectator. 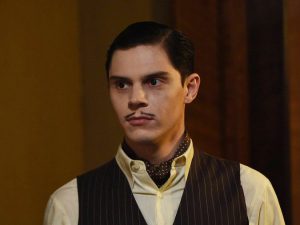 His voice work is equally paramount to his success. The cadenced culture of the 20s and 30s heard in the voice of James March, created by Peters himself, was truly an echo of a former time, if only idealised and mimicked by the character. It acted as March’s mask of similitude to a world he was never a part of, apart from when let down by the very human feeling of anger. March was a game changer for Peters; a mockery and parasite of the society he lived in and a character completely unlike anything he had done before. He had had encounters with monsters before, and found the human within the inhuman, but the morbid fascination he needed to inspire from such an infamous figure in history was no easy task. While the rest of the cast still felt familiar, which is one of the reasons it is well on its way to curing me of my fear of horror – probably not what the creators had in mind – Peters felt completely new, spontaneous, and terrifying.

Although I praise Peters, many of his characters have been similar in one respect. They were not men, but boys, a twisted bildungsroman in each series just waiting to happen. James Patrick March changed all this. It gave testament to Peters’ ability as an actor, and his ability to completely transform and inhabit an atypical character. The teenage boy replaced by the enigmatic man.

The series that you need to watch:

Disclaimer – This is ranked in terms of Evan Peters’ characters, and not in terms of series supremacy. 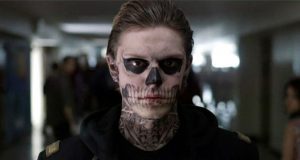 See the trailer for the latest season of American Horror Story, Hotel, which stars Evan Peters as James Patrick Marsh, below.