It feels like this one’s been a long time coming, but James Corden‘s The Late Late Show will finally arrive on UK screens this week.

Corden became an icon of British comedy after creating and starring in Gavin & Stacey, but two years ago, he was poached by the States to host their biggest late night talk show. It’s understandable that Corden would be more than happy to present a hugely successful show, most likely with a hefty pay packet, which is filmed in sunny LA. What we’re less forgiving of is that it has taken this long for The Late Late Show to come to the UK. His interviews with famous guests and, in particular, his humorous feature ‘Carpool Karaoke’, have been a storming hit worldwide through their availability on YouTube and social media. Recently, he featured fellow Brit Adele in the segment, and we at The Edge put Carpool Karaoke as a highlight in our mid-year review earlier this month. Well, from Tuesday 19th July, full episodes of The Late Late Show will be available to watch via Sky‘s ‘On Demand‘ service, with each episode available the day after its US broadcast. Exciting times! 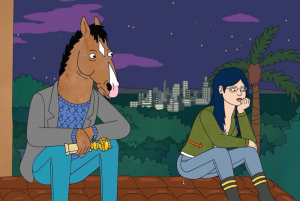 A more quirky comedy returns this week in the form of Netflix’s BoJack Horseman. This slightly bizarre American animated comedy features the vocal talents of Will Arnett, who plays a self-loathing alcoholic horse. Hear me out; it’s in a world where anthropomorphic animals live alongside humans, so that makes it all totally fine. We are now on Season 3, and when all twelve episodes are released this week, there’s a guest star from Weird Al Yankovic in amongst the chaos. So you need to watch. BoJack Horseman‘s third season comes to Netflix this Friday, 22nd July.

Thriller Live is also set to explode into the Mayflower Theatre  this week. Direct from the West End, where it’s had eight successful years on the stage, this jukebox musical is a two-hour explosion and tribute to the legendary Michael Jackson. It touches upon his many genres, from pop to rock, soul to disco. Our writer reviewed it when it was at the Bournemouth Pavilion last month, and called it ‘fun-filled and energetic’ watching. Thriller Live arrives at the Mayflower on Monday 18th July and stays until the 23rd.

Image via the Daily Mail

English fashion blogger and social media personality ‘Zoella‘ (aka Zoe Sugg) releases her third book this week! The latest in her Girl Online series, Girl Online: Going Solo follows a character based on Zoella herself, entering the world of blogging. In this novel, she visits a performing arts school and sees it as an opportunity to make some new friends. Girl Online: Going Solo arrives in bookstores on Sunday 17th July.

See Selena Gomez with James Corden in the latest Carpool Karaoke below: