Read more
You are at:Home»Culture»Review: Unreachable at The Royal Court Theatre
By Rehana Nurmahi on July 15, 2016 Culture, Theatre
60%
60
Bizarre

An enjoyable production with a wonderful cast with great chemistry; but it's never quite sure where it's going.

Earlier this week, I ventured up to The Royal Court Theatre in London to see Matt Smith’s return to the stage in Unreachable – a new play written and directed by Anthony Neilson. Going into it, all I knew was that the play focused around a film director obsessed with finding the perfect light. To be fair though, that’s all that anyone knew about Unreachable, mostly because the final script was only produced the Friday before we saw it.

Being what is known as a devised play, the story was created within the rehearsal room, changing and evolving right until the final day of previews on the 8th July. The director started with a cast and a concept, and it is from there that they worked together, incorporating elements of themselves into the production to form the narrative.

So there we were, sat up in the balcony of The Royal Court Theatre, not really sure what to expect. I’d heard it was a comedy, but other than that and the previous aforementioned details, I really didn’t know what was coming. The stage was relatively empty; a few stage boxes and a couple of lighting screens around, but not much else. I couldn’t help but think that for a play about finding the perfect light, the room was rather dark and dingy.

And then it began. A young woman, who we learn is Natasha (played by the astounding Tamara Lawrence), comes on to stage to perform her audition for the dystopian war drama, ‘Child of Ashes’. Her audition is relentless. She is serious and heartbreaking, pouring her heart and soul into words about loss and motherhood, and the desperation that her war torn situation has led her to. The whole theatre was silent. Then from offstage we hear a voice offering her a congratulations and her audition is over. Suddenly, we’re faced with a very common, relaxed, emotionless London girl, asking where she can go to take a piss. The polar opposite. 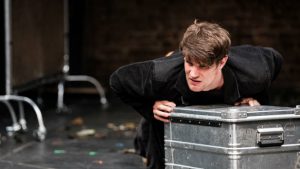 The narrative follows Maxim (Matt Smith), an emotionally unstable director who, off the back of winning the Palme D’or, is trying to make something to prove him worthy of success. The first scene in which we meet him, he is arguing with his producer Anastasia (Amanda Drew) and cinematographer Carl (Richard Pyros) about wanting to switch from recording their footage digitally to recording with film. He insists that this is the way to catch the perfect light he needs to finish the film. Well… we say finish, rather start it. The whole play follows their filmmaking process, as Maxim finds all ways possible to prolong the filming period so that he can find this light, this light which isn’t just a light but a feeling – but also so that he can procrastinate in his mission to prove himself.

The narrative is one about the creative process, and the way that they use the set and transition between scenes is a very good way of showcasing this. The props mostly consisted of stage boxes and lighting screens, only occasionally presenting us with other things. It is very minimalistic to look at, but very cleverly integrated. For example, a feature I really liked was that between each scene, they showed the stage crew moving things around, and announced the scene number when the play resumed. The stage boxes were used in various ways too, making for much intrigue (special mention here to a truly bizarre sex scene involving those boxes). 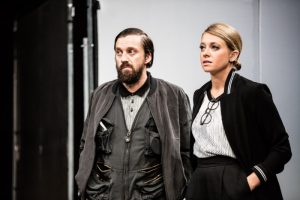 The cast are truly wonderful, with a really great dynamic, and perfect comic timing. Matt Smith was perfectly believable as the slightly insane, hypochondriac, obsessive Maxim; bringing elements of the quirkiness we loved him for in Doctor Who to the role effortlessly. Richard Pyros is awkward and pitying as Carl, the director of photography who is vying for Maxim’s director position, bitter about the attention that Maxim gets from producer Anastasia – with whom Carl is having a secret relationship. Amanda Drew’s Anastasia is efficient and brilliant, a realistic producer who is frustrated at her client and friend, but refuses to give up on him. Genevieve Barr is kind of annoying as Eva, but her character is meant to be. Also, the deaf actress who appears as a deaf character not hindered or in anyway defined by her impediment, was a very refreshing casting choice, and is a reminder of how theatre thrives when it comes to diversity. 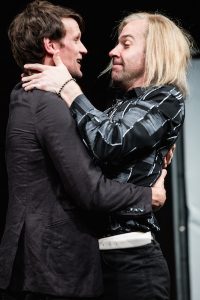 Overall though, there were two stand out performances, and these came from Jonjo O’Neill as Ivan the Brute and Tamara Lawrence as Natasha. Ivan is introduced in the second half of the play, and his opening monologue is one of the most confusing and disturbing that I have probably ever seen on stage; and I work in a theatre, so I’ve seen some weird plays. However, as well as being ridiculously politically incorrect and very creepy, Ivan is pure hilarity. Every scene he was in had me in creases of laughter, even if they also had me in complete confusion. Briefly having the opportunity to chat to Jonjo at stage door, the actor is the binary opposition of this – he is humble and softly spoken, so I can only imagine how fun it was to play this character for him.

Natasha is a wonderfully written character as an actress who keeps her personal and acting life completely separate, who sees a part as just a part, rather than having any sort of personal connection. This makes for a wonderful commentary on the acting business, but is mostly just a delight to watch because Lawrence is a gem. She is charming and revering in this role, and her chemistry with Matt Smith is tangible and brilliant; their developing friendship a real highlight of the play. Considering the fact that Lawrence only graduated from RADA last year, it just makes the feat and the performance that much better.

As you can see, I have few, if any, bad words to say about the team that bring this play to life; however, I do have some bad words to say about the play. Tonally, it seems very confused. It switches from these intense serious scenes, to the outrageously comic within minutes, and the transition between the two isn’t always as smooth as it should be. As well as this, there are some plot twists that just seemed unnecessary, and don’t make any sense, or add anything to the enjoyment of the play. Also, although I have briefly described what the play’s plot, I never quite worked out what it was actually about, and whether it had a point or not. Sometimes things were taken too far, and other times, just not far enough. It is very clear that this play is devised, with the actors occasionally (well pretty often) fumbling their line and bursting into laughter on stage, and though this adds a sense of authenticity, it can also distract and pull the audience out of the narrative.

Reading reviews for this play before entering it, it was clear that the opinions were very mixed, and emerging from the theatre afterwards, it was clear to see why. It is definitely hilarious, and the cast are delightful, but other than that, it is very hard to put into words how I actually feel about this play. I feel like a bit of a cop-out going for a mediocre review, but I don’t really know what else I can give it. When talking to Matt Smith, albeit very briefly, at the end of the play at stage door, he remarked, “It is a bit out there, isn’t it?” – and it truly is. I congratulate the cast and creatives on their process of creation, and it was definitely an entertaining watch. However, I completely understand that it wouldn’t be everyone’s cup of tea – and I’m still not completely sure if it was mine or not.

Unreachable, starring Matt Smith, is playing at The Royal Court Theatre until the 6th August. Tickets can be bought here.