Read more
You are at:Home»Culture»Intro to: Mr. Robot
By David Mitchell-Baker on July 13, 2016 Culture, Television

From the mind of Sam Esmail, whose only work of note prior to the show was as writer and director of the Justin Long indie romance flick Comet, comes Mr. Robot – a thrilling, mesmerizing new show, sure to become a juggernaut of TV in next to no time. 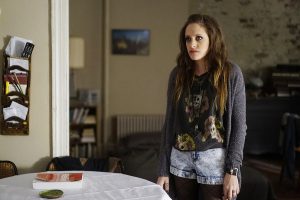 Darlene (Carly Chaikin), a member of fsociety [image via IMDb].

Starring Rami Malek (Night at the Museum trilogy, Short Term 12), Carly Chaikin (Suburgatory), and Christian Slater (Robin Hood: Prince of Thieves, True Romance), Mr. Robot tells the story of a young computer hacker, Elliot (Malek), who suffers from social anxiety and depression. When he encounters a mysterious man who goes by the alias “Mr Robot” (Slater), the leader of hacktivist group the ‘fsociety’, Elliot’s world is turned upside down as he becomes part of a much bigger plan that could potentially change the world, and the order of society, for good.

The character of Elliot is a fascinating one. He narrates many episodes, talking directly to the viewer, informing them on how lives the different aspects of his life. From the off, we are connected into Elliot and his story; he becomes such an intriguing character to follow, and he gains our sympathy and backing instantly. Malek’s performance is truly stunning. But Esmail doesn’t just create one intriguing character, he creates several. Elliot’s childhood friend and co-worker, Angela (Portia Doubleday); Darlene (Chaikin), one of Elliot’s fsociety allies; Tyrell Wellick (Martin Wallstrom), the vice-president of technology at enemy company E Corp; and Mr Robot himself, are all fascinating characters in their own right and serve as excellent additions to the show’s ensemble. Slater’s performance in particular is the perfect mix of enigmatic, complex and damaged, one that has won him a Golden Globe no less. 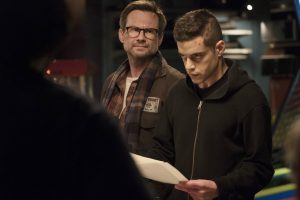 As much as Mr. Robot is an original show, the influence from several films are evident on Esmail’s work. There’s the mentally scarred-lone drifter type character clearly influenced by Robert DeNiro’s character Travis Bickle from Taxi Driver; the “down with the system”/anarchist themes from Fight Club; and a crucial ferris wheel set discussion in Episode 1 that is almost identical to a famous The Third Man scene. It’s a staggering feat for Esmail to do what he’s has with Mr. Robot, but he clearly seeks to honour what has come before him and express his love for these cinematic landmarks.

The actual filmmaking is also stellar. The cinematography is excellent, used as a tool in its own right to tell the story; the editing is smooth and works well at telling multiple stories throughout episodes. The show’s use of electronic music sets an ambient tone and just heightens the undeniable feeling that Mr. Robot is cool – there’s no other way to put it. There’s also the perfect use of Maxence Cyrin’s cover of The Pixies’ ‘Where is my Mind?’ late on in the season, but to explain just why it’s so perfect would be to spoil an excellent piece of storytelling. There’s a touch of the surreal about it, and it works fantastically.

Season 1 may not have made huge waves here in the UK upon its initial release (it’s picked up some steam on Amazon Video), but be sure to catch up with the show before it returns this month. If you haven’t already, then you’re missing out on one of the finest new shows of the decade. But if you have already seen Season 1 – the revolution isn’t finished. There’s more work to be done…