Read more
You are at:Home»Culture»Review: Funny Girl at the Savoy Theatre
By Jasveen Bansal on July 4, 2016 Culture, Theatre
80%
80
Amazing

Despite only recently taking on the role of leading lady, understudy Natasha Barnes is both captivating and hilarious as Fanny Brice, bringing a charm and voice to the role.

The West End production of Funny Girl originally completed a sold out run at the Menier Chocolate Factory in 2015. It’s popularity and on-going praise led to the production being continued, now running at London’s Savoy Theatre.

The name ‘Fanny Brice’ may ring a bell for most, but this particular musical was my first introduction to any telling of her real life story. The semi-biographical musical first opened on Broadway in 1964, with Barbra Streisand cast as Fanny in her breakthrough role. The musical immediately earned widespread recognition and acclaim, and soon Streisand’s name was as large as her iconic voice. Streisand has since taken up the role on the West End stage, as well as in a critically acclaimed film adaptation (acknowledged both by The Academy of Motion Picture and The Hollywood Foreign Press Association) – cementing the name Fanny Brice in theatre history. It’s therefore not an exaggeration to suggest that to further adapt such a theatrical classic is no easy feat.

Sheridan Smith has received praise from critics and audiences alike throughout the show’s run, but the inevitable exhaustion a long theatre role produces has led to her stepping down from the role for a short time. I was informed that Natasha Barnes would be the leading lady in her absence, which was initially disappointing news. For many, Smith’s involvement was perhaps the appeal of the show. In either case, as the Savoy Theatre began to fill up, the excited anticipation for such a well-received show was clear, and soon Barnes proved to exceed all expectations.

In terms of actual production, the transition the stage goes through is subtle and seamless, taking us from Fanny’s dressing room, to the airport, and to the mansion she resides in with her husband. The show simply doesn’t need lavish and extravagant production and sets. Indeed, Funny Girl is a musical about the theatre itself, and it therefore does not need to compensate with production value: the songs and voices of the cast carry it effortlessly. Act 1 follows Fanny’s rise to theatrical recognition. The very definition of an underdog, overlooked in the world of theatre due to her lack of ‘traditional’ beauty, she is consistently and stubbornly looking to prove herself. ‘If a Girl isn’t Pretty’ is the musical number to reiterate this aspect of Fanny’s life, and immediately we find ourselves rooting for her. Natasha Barnes excels at bringing forth Fanny’s particular comedic charm, because Fanny is exactly that: a comic. Her signature facial impressions and instinctively witty comebacks consistently hit the mark (“I’m a horse breeder.” “What’s the matter? They can’t breed themselves?”). Barnes’ comedic timing and delivery bring to life the charisma that endears the world to fall for the underdog. In comparison, Act 2 is slightly less exciting. The shift in focus to the rocky nature of Fanny’s marriage isn’t as captivating in terms of story, yet while the plot can appear somewhat faltering in this way, the music and characters remain consistently wonderful.

Theo Jamieson thrives as musical director, offering a range of songs that delights audiences. Of course, the classic ‘Don’t Rain on my Parade’ is a complete show stealer, and I was personally fighting the temptation to give Barnes a standing ovation there and then, mid-Act 1. She performs it with such passion that you’re suddenly inspired to make sure that no one dares rain on your parade ever again. Emotions continue to run high as Barnes’ duet with leading man Campbell, ‘People’, shows Fanny’s rarely exposed vulnerability, made all the more intimate by the stripped back arrangement of what is a belter number. Of course, the transition Barnes is able to make between vulnerable and just plain silly is brilliant. ‘His Love makes me Beautiful’ and ‘Rat-Tat-Tat-Tat’ are clear examples of the shows absurd side, and audiences are left grinning – giddy from the fun and mischievous humour that never fails to deliver. 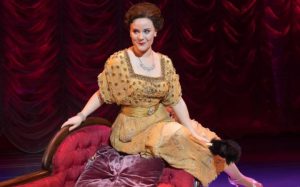 Natasha Barnes [Image via the Telegraph]

Barnes certainly owns the stage in her transformation into Fanny Brice. She comes across as so human and utterly likeable. In particular, her aside remarks to the audience act as a little ‘nudge nudge’ with each punch line, and it suddenly feels like you’re her best friend. During the show’s most comedic and intentionally ridiculous song, Barnes encountered a slight unplanned costume blunder; in the form of a not so sticky fake moustache. We see her struggle a little to keep in on, but as she laughs it off and works it into the performance with a bit of improvisation, Barnes ends up truly encapsulating Fanny’s character. Only two songs earlier we saw how Fanny herself was a fan of last minute improvisations, so Barnes ripping a fake moustache off her upper lip and pressing it on like a forehead, as she mock-seductively wiggled her newly made uni-brow at the first row? Fanny would’ve been proud.

While Barnes leads the musical with comedic and, when necessary, emotive brilliance, the rest of the cast also deserve credit. Not a single cast member provides room for criticism. The sheer volume of dance moves memorised by the showgirls and two male members of the ensemble (Luke Fetherston and Philip Bertioli) are awe inducing. Despite their lack of lines, they had a stage presence during the chorus numbers that awarded them enthusiastic cheers come curtain call. Additionally, Joel Montague was the lovable best friend we all want. Barnes’ Fanny was the obvious comedic focus of the musical, and yet Montague proved to be the comedic relief we didn’t even know we needed. His sugar-coated sarcasm was a joy. It allowed him to bounce off Barnes and create a wonderfully comfortable on stage relationship that was as well received as his tap dancing. A raving review of the cast cannot be complete without mention of Darius Campbell’s portrayal of Fanny’s husband, Nick Arnstein. Campbell was the epitome of sophistication and charisma. The chemistry between Campbell and Barnes is undeniably electric. Fanny’s infatuation with him was certainly understandable; from his smooth American accent to his inescapable flirting skills, Campbell was both the charmer and the trouble-making risk-taker that we couldn’t help but forgive. And at 6 ft 3 inches (yes, I checked), I confidently speak for the entirety of the Savoy Theatre when I say: we swooned. Admittedly, at times, Arnstein does come across as somewhat one-dimensional, particularly when placed against a character so developed and varied as Fanny. But of course, what Arnstein lacks as a character, Campbell makes up for in vocal performance.

Though Sheridan Smith has been praised in her role as Fanny, now I have seen Natasha Barnes take on the lead, it becomes unimaginable to consider the musical without her. She carries Funny Girl with utter charm and mischievous wonder. My adoration of her did not waver at any point, and the standing ovation that she received was simply proof that she is an unforgettable stage presence and a worthy Fanny Brice.

Funny Girl will continue to run at the Savoy Theatre until October 8th, with Sheridan Smith expected to make her return to the show mid-July.