Dark humour at its blackest, Piper (Taylor Schilling) faces the consequences of her newfound power at the hands of a new, surprising villain.

Orange Is the New Black has learnt from its mistakes. Season 3 was by far the show’s weakest outing, with the big names in the prison sacrificed in favour of bringing forward more minor characters. The blackness of that dark humour that makes OITNB so distinctive turned a little ‘grey’; but with Season 4, it has become a darker shade of black than ever before.

When Piper (Taylor Schilling), the often lacklustre and criticised protagonist of OITNB‘s earlier seasons, strolled around the prison in Episode 1, declaring herself “kinda a big deal around here”, I will admit I laughed. She’s no Red (Kate Mulgrew), or some of the other big names we’ve seen in the history of the show. However, her delusions of grandeur soon developed into a dangerous power complex, and in Episode 7, she finds herself swimming in water too deep for her as she faces the consequences of taking on Maria (Jessica Pimental). 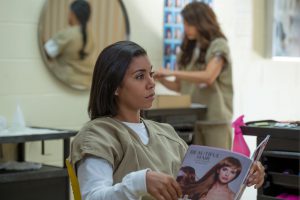 Pimental is a welcome villainous presence. Unlike previous seasons, where villains have arrived in the prison as new inmates, Maria has been appearing in the background since Season 1. The exploration of her dodgy background a few episodes earlier gives us context to why Maria, framed for Piper’s panty crimes, has risen to become the primary antagonist of the season – and what a great job Pimental does of playing her. Piper faces the consequences of her actions just as she starts to atone for her sins, as her own people turn on her and she is delivered some painful justice in some of the show’s most disturbing scenes yet. There’s no humour as Piper is branded with the Nazi symbol, her screams drowned out by loud music.

It adds much needed development to Piper’s story arc, which disintegrated into laughable territories after the show’s opening season. It’ll be fascinating to see how this affects the character, and her newfound confidence; will the old Piper, fragile and snivelling, re-emerge, or will this new, power-crazed Piper come back to wreck vengeance on Maria and her gang? Only time will tell.

Elsewhere, the episode explored Lolly’s (Lori Petty) past. It’s a shocking transformation, as young Lolly, a budding journalist, is completely unrecognisable with fashionable clothing and shoulder-length brown locks. It’s also touching to see Healy (Michael Harney) determined to help her; a redemptive arc for the character who has failed so many inmates, including Piper. Lolly is fast turning into one of the show’s most interesting characters, especially after her murderous actions with Alex (Laura Prepon) at the start of the season. Could Lolly and Healy’s friendship be the start of this murderous truth unravelling?

It’s great to see Orange Is the New Black back on track, and brimming with possibilities with dark secrets to be exposed left right and centre. With new characters still proving interesting, it’s great to see the focus return to fan favourites like Piper, Red and Alex. Oh, and Nicky (Natasha Lyonne) is back. Who doesn’t love Nicky?

Orange Is the New Black‘s fourth season, along with its first three seasons, is available via Netflix.