Nooo! It can’t be! Surely it hasn’t been ten weeks since Game of Thrones returned? But sadly this week sees the most explosive season of the show yet conclude – most likely in similarly dramatic circumstances. 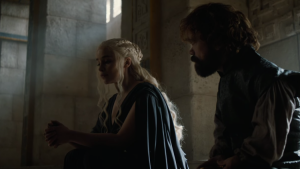 Surely nothing can outshine the brilliance that was last week’s ‘Battle of the Bastards’, but if I know Dan Benioff and D.B. Weiss (the gods of death/showrunners of GoT), they’ll give it a good shot. Entitled ‘The Winds of Winter’, the episode’s single-line synopsis reads: ‘Cersei faces her trial’. So not very revealing! The trial in question is for Cersei Lannister (Lena Headey), who faces the judgement of the High Sparrow (Jonathan Pryce) and his Gods for her sins. Knowing Cersei, she’s got an explosive and likely terrible trick up her sleeve. Elsewhere, the trailer for the episode hints at a showdown between Ser Davos (Liam Cunningham) and Melisandre (Carice Van Houten), after he discovered last week that Melisandre burnt little Princess Shireen alive in Season 5. And as the evil Walder Frey (David Bradley) and Jaime Lannister (Nikolaj Coster Waldau) toast the memory of the Red Wedding, could Arya Stark (Maisie Williams) be about to cross another name from her list? Game of Thrones airs its finale at 10pm on Monday 27th June on Sky Atlantic, and will be available afterwards via Now TV. 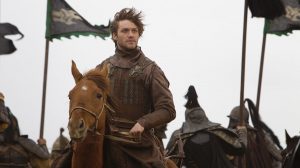 In the world of Netflix, the second season of Marco Polo arrives on the streaming site next week. Back in December 2014, the first season of the series was met with critical acclaim. The show is a historical drama series, inspired by the life of the real Marco Polo in the court of the Kublai Khan. In the second season, Marco (Lorenzo Richelmy) and Kublai (Benedict Wong) encounter a dangerous warrior monk that arrives at their court in chains. The entire season will be available to stream on Netflix from Friday 1st July.

Gaming wise, this week sees the long-awaited arrival of LEGO Star Wars‘ latest instalment – all based around the new film The Force Awakens. In addition to levels based on the actual film, the game includes all-new additional content, with stories from the world of Star Wars that are yet to be told. That includes the story of how C3PO ended up with that red arm, and Finn’s history with the First Order. LEGO games are always great fun, so it’s a must-own, even if you’re not a hard-core gamer! LEGO Star Wars The Force Awakens will be available to buy on Tuesday 28th June, for the majority of the big gaming consoles.

And coming to the Nuffield this week is something very special – The Gruffalo’s Child, live on stage! It’s the sequel to the original, critically acclaimed Gruffalo play, based on the literary masterpiece by Julia Donaldson and Axel Scheffler. It has been described as a ‘magical, musical’ experience. “One wild and windy night the Gruffalo’s child ignores her father’s warning and tiptoes out into the snow. After all, the Big Bad Mouse doesn’t really exist… does he?” The Gruffalo’s Child is at the Nuffield Theatre from 28th June to 3rd July.

So we’re in for an exciting week of culture – a sad goodbye (for now) to Game of Thrones but hello to Marco Polo, LEGO Star Wars, and The Gruffalo’s Child. Roll on July!