Read more
You are at:Home»Culture»Review: Orange Is the New Black (Season 4, Episode 1)
By Hollie Geraghty on June 22, 2016 Culture, Television
60%
60
Promising

Although this episode doesn't open the season with a gripping brand new plotline, there's certainly potential for a great season ahead.

After much anticipation, Season 4 of Orange Is the New Black is finally ready for us to binge watch on Netflix! Season 3 was full of many gripping storylines to keep us entertained: Daya’s abandonment by Bennett, Piper’s relationships with Alex and Stella, Morello’s search for companionship, even Piper’s dirty panty business. In many ways however, the number of plotlines made it difficult to become enticed, and didn’t ever leave us desperate to start the next episode – there was no single narrative that was constantly leaving us on edge. 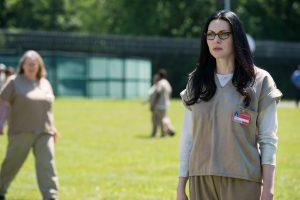 Although I was not going into Season 4 feeling overly positive, Episode One was promising. The season begins instantly returning to the inmates’ short-lived freedom, after they escaped through a hole in the fence and went swimming in the nearby lake. The inmates’ prison beach trip was a touching ending to Season 3, but they are quickly brought back to reality as the season opens, being rounded up by correctional officers.

Audiences were quickly re-familiarised with the hilarious OITNB humour as Alex (Laura Prepon) and her new friends Lolly (Lori Petty) and Freida (Dale Soules) try to hide the body of the hitman hired by Alex’s old boss Kubra – a gruesome yet oddly funny scenario. Suzanne ‘Crazy Eyes’ (Uzo Aduba) ends a short-lived romance with the actually ‘crazy’ Kukudio (Emily Althaus), who desperately wants to live in a fantasy world, and also has an unhealthy obsession with Suzanne’s erotic/sci-fi novellas, the ‘Time Hump Chronicles’. Litchfield also sees the influx of 100 new prisoners along with new guards, which creates rivalries amongst old and new inmates. We also see more of the new ‘tough’ Piper (Taylor Schilling), who insists on showing her new bunk mate who’s boss.

Ultimately, Episode One acted as both a reminder of the previous season, and a springboard for Season 4. There’s certainly potential for new character developments and hopefully the return of some absent characters – I’m thinking John Bennett (Matt McGorry) AKA the father of Daya’s baby. A lot is changing in Litchfield, and tensions are certainly running high; there’s no telling what could happen as the season continues.

Orange Is the New Black‘s fourth season, along with its first three seasons, is available via Netflix.