Catalyst is a welcome return for a long dormant franchise, and it's a pleasure to free-run through the 'City of Glass'.

The original Mirror’s Edge was released in 2008. A unique and innovative first person free running experience, it was set in a futuristic world, an unsettlingly serene city dominated by surveillance cameras. While it did not get raving reviews or break any sales records, it did earn a cult following. I was one who sang its praises, but its follow-up has been in development hell for years – only surfacing at 2013’s E3. Originally speculated as a sequel, it finally appeared as a reboot. 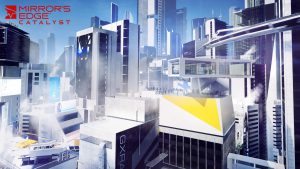 Catalyst‘s set-up is pretty simple. You are a younger version of Faith Connors (the original’s protagonist), a teen who has just been released from a juvenile detention centre. Faith lives in the ‘City of Glass’ in a country called ‘Cascadia’, a dystopian future world run solely by corporations, where every person must work for the good of his designated corporation. Each ‘employee’ is implanted with technology (think ‘Google Glass’) which directly feeds all information about their work, and the daily news, to their eyes. Faith is part of a group of free runners (aptly named ‘The Runners’) who live outside this system of control, and make a living by delivering products and messages for both criminals and the elite. The context of the world is engaging, and the aesthetic feeds into this. Every building in Mirror’s Edge is characterised by elaborate designs containing obscure shapes, but it only uses a few standard colours. This somewhat basic design is striking, and helps create the feeling you are in a world completely controlled by the elite of society. This is all underlined by a great ambient electronic score, which changes based on the action taking place. 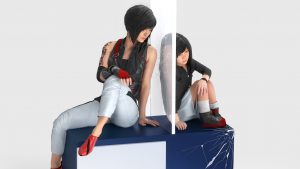 The narrative follows Faith stumbling onto a plan to control people’s very emotions by the dominate corporation ‘KrugerSec’. This leads to an interesting plot, along with a few surprising twists. Faith herself is a great protagonist, always doing what needs to be done, but also heavily doubting herself, and at times breaking down due to the pressure of her given situation. The supporting cast aren’t quite as fleshed out, and are often stereotypes (guy who gives you a hard time but ultimately respects you, tech geek who doesn’t understand social conventions), but you still grow to care for them by the end. The main downside is the game’s conclusion, which doesn’t resolve enough, and obviously leaves things to be tied up in a sequel. The story is serviceable and enjoyable, but not up to par with games like Uncharted 4 or The Witcher 3.

The biggest change from its original is its structure. Now Faith can run around an open world, that acts as a hub for the main missions. There are numerous activities and collectables to be found, as well as side missions and user created races. It isn’t a complete open world, akin to something like the Fallout or Grand Theft Auto series’, but is an enjoyable addition nonetheless. The highlight of the game is the main quest levels. These see Faith infiltrate or climb a location, ranging from a construction side to a crumbling skyscraper, and before she is caught or the building starts falling apart, you must make a quick getaway. While some newcomers may find this approach to mission design simplistic, it is core to the Mirror’s Edge experience, and helps create some exhilarating runs.

The actual gameplay of Mirror’s Edge is made up of two different components: free running and combat. Faith can quickly move about the city by jumping long distance, wall running, vaulting over fences, and swinging from ropes. Most moves can also be upgraded, giving the player more variety in the way they move around. The running has a great flow to it, and navigating through an entire level quickly feels great. The hand to hand combat has been greatly improved with the ability to hit enemies mid-run or carry out combo moves to swiftly defeat those in your way. Running past them is always going to be the desired course of action – although combat is fun, if not a little simplistic. Of course, the actual act of free running wouldn’t be great if the controls were poor. Most of the climbing is mapped to the left bumper of the controllers, while using the left trigger allows you to reduce the impact of a fall or burst into a roll. These controls feel right for the types of movement you perform, and make the game more immersive.

I only have a few minor gripes with Catalyst. The multiplayer offering is relegated to user created races. These are dotted around the open world hub and you can compete for the fastest times on a leaderboard. But I feel they missed an opportunity here and racing physically against your friends in this world would have been a better option. Secondly, the side missions usually boil down to timed delivery quests, and all feel identical. They are challenging, but more variety could have gone a long way. Finally, the city can feel a little barren, with practically no one inhabiting the roof tops apart from a few quests with NPCs. These can all be overlooked, but worth knowing if you expect Catalyst’s open world to rival the best in the industry.

The fact that Mirror’s Edge Catalyst exists should make any gamer happy, especially coming from EA. One of the most unique games in the last ten years getting a sequel, despite not being critically acclaimed or selling particularly well, is great for the game industry, especially from the producers of annualised franchises like FIFA and the developers of the Battlefield series. Mirror’s Edge Catalyst isn’t for everyone, but if you loved the original, you’re going to find a lot to like here. It’s improved on every aspect of its predecessor, while completely expanding the lore of its universe. The look, score, narrative, and controls help completely immerse the player in this utopian city, and anyone willing to try something completely focused on moving around in an open world should find an enjoyable experience with Catalyst.

Mirror’s Edge Catalyst is available now for Windows PC, Xbox One and Playstation 4.