After 6 seasons of increasing brilliance, 'Battle of the Bastards' epitomizes everything the show has been working towards for so long. Sublime and shocking, this is masterful television.

They did it. They more than did it.

And no, I’m not just talking about the Starks; I’m talking about the entire team behind this unbelievable show. The eponymous battle of ‘Battle of the Bastards’ was one of, if not the, best medieval war sequences I have ever seen, in TV or otherwise. Every facet of the fight was expertly crafted, produced and shot. And the scale. Say what you will about the Dothraki horde, and Daenerys’ scaly pets; this wasn’t sleight of hand: it was practical, physical stuff. The effects, the choreography of so many actors and extras, the camerawork, and the amount of bodies – living, dead, or somewhere in-between – on screen, all at the same time, made this not just the crowning achievement of the sixth season, but potentially the entire show, and maybe even the entirety of television’s second golden age.

And god, how satisfying it was to finally see the Starks avenged. After six seasons of failure and death, finally things were put right, and in the best of ways. We all wanted Ramsay (Iwan Rheon) to get a good death – apart from maybe the Bolton loyalists over at the Dreadfort subreddit – we just didn’t know what that meant, or if the showrunners could pull it off. Well, they did, and it was spectacular. What a fitting end for a man obsessed with control to die because he could no longer exercise it. 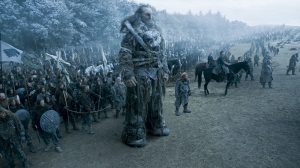 The North was fantastic, but what a slog of an emotional marathon! The writers spent almost the entire back half of the episode dangling Jon Snow (Kit Harington) off of a cliff edge. His mindless charge at the Bolton ranks, in a hail of arrows; his faux final stand against Ramsay’s charging horsemen with only Longclaw and his man-bun; being trampled in the body-pit by his own panicking men. I was more than ready for fate to double-down on the mortality of the world’s favourite bastard. But it didn’t, and he won. Of course, credit has to go to the Vale, but bloody, muddy Jon was the real hero of the hour, charging down the Winterfell gates with Tormund (Kristofer Hivju) and Wun Wun the Giant (Ian Whyte) to raise the Stark banners. While Ramsay watched from a horse on a hill, Jon was slicing and dicing his way through the thick of the battle. The bastards’ penultimate Fist Full of Dollars showdown in the Winterfell courtyard captured that dynamic perfectly; Ramsay’s tricks had run dry, and even if he’d had a mile and a bottomless sheath, Jon’s fists were going to reach his smarmy face. If we’ve learnt anything this season, it’s that Jon Snow is more determined to kill bad guys than the Gods are to kill him.

One more thing I want to mention is the use of bodies. D&D (Showrunners David Benioff and D.B. Weiss) moulded the battlescape with corpses, trapping the Stark forces in a literal death pit, and giving us some of the most grotesque and upsetting imagery we’ve seen from the show thus far. It was innovative and incredible, in all the wrong and right ways.

So, that was the North. But what about Meereen? I hadn’t expected to see anything from the rest of Westeros this episode, let alone from across the sea; I thought we were going to get another Blackwater (my second favorite episode of the series now, after this one!). But we didn’t; instead, we got a cohesive double narrative with a lot of great parallels – most notably the children of terrible fathers coming together or coming to blows. Bastards one and all. 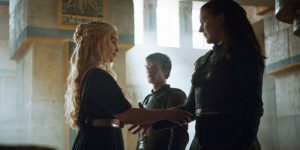 Daenerys’ (Emilia Clarke) dragon-mounted return to Meereen was cathartic and spectacular, and one of the all-time most satisfying moments in the show (again, only second to Jon pounding away at Ramsay’s face with a metal club of a fist – if you haven’t guessed the score by now you haven’t been paying attention). Finally, the dragons are free; finally, the masters are dead; and finally, thanks to some helpful plot teleportation from the Greyjoy siblings, things are on track for the Dragon Queen invasion we’ve been anticipating since season one, and for the first book readers, since 1991.

Oh, and I ship Dany and Yara (Gemma Whelan) too hard. I think it’s becoming more and more clear that Game of Thrones is a fantasy about how women could have fixed human HIStory. The fiction is that they got their chance. Sansa (Sophie Turner) has won the North, and Dany and Yara are about to take Westeros. Let’s have it.

This was simply the best episode of the show. It was everything we wanted and way, way more. And as an aside, thank god that the spoilers and leaks floating around the internet weren’t true, or were at least weirdly sparing. No mention of Ramsay’s death or the battle in Meereen? I’m calling bullsh*t.

Game of Thrones concludes next week, 10pm on Sky Atlantic. The season is available now via Now TV. See a trailer for the final episode, ‘The Winds of Winter’, below.