Some big laughs are ahead this week, as a quirky sitcom returns to E4, and one of our best loved female comedians arrives at the Mayflower Theatre. 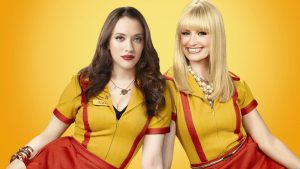 2 Broke Girls returns to E4 this week. This quirky sitcom follows two broke waitresses, Max (Kat Dennings) and Caroline (Beth Behrs), working in a Brooklyn diner, with aspirations to start a successful cupcake business. As usual with comedies originating in the US, the fifth season has already finished over there, but us lucky Brits have the whole season to look forward to when it starts this week. Episode one sees the diner in danger of being demolished to make way for an IMAX cinema! 2 Broke Girls returns this Tuesday (21st June) at 8pm, on E4.

In the world of gaming, this week sees the release of Mario & Sonic at the Rio 2016 Olympic Games. The fifth title in the Mario & Sonic series, the game sees characters from each series pitched against each other in gaming events, this time taking the duo to the Olympic Games in Rio – ahead of the real Olympics next month. Using the Wii U platform, players can take part in some of the console’s iconic sports games, from javelin throwing to mimicking running events. It’s officially licensed by the Olympic Committee, and is released on Friday 24th June for the Wii U.

Victorian is a brand new novel from Goodreads author Jordan Elizabeth Mierek. This teen book sees summer volunteer Celeste join a local historic fair, where ghosts have been stirred by a medium’s presence. Teaming up with the psychic’s son, who is not her dream date, Celeste uncovers the town’s dark secrets. It promises to be one of the most exciting teen releases of the summer, and is published this Friday, on 24th June.

At Southampton’s biggest theatre, the Mayflower, we have to wave goodbye to Mary Poppins, who finally flies away after a month with us. The last performance is this Sunday, 19th June – for those lucky enough to have tickets, see the Edge‘s review here. But fear not, as The Mayflower is also set to welcome comedian Sarah Millican with her new tour, Outsider. The intriguing premise reads: ‘Sarah’s venturing outside. Bring a cardie.’ Sarah Millican is at the Mayflower on Friday 24th June. Read out preview here.

See Sarah chat to Holly and Phillip at This Morning about her new tour below.