Read more
You are at:Home»Culture»Actress in Focus: Anna Friel
By James Barker on June 17, 2016 Culture, Television

Anna Friel may be best remembered by your parents for her role in Brookside back in the 1990s, but she’s back on telly in the critically acclaimed Marcella, from ITV. Created by Hans Rosenfeldt, writer and creator of Nordic drama The Bridge, the series brings the riveting world of the Scandinavian noir thriller to London’s beating heart, creating one of this year’s must-see crime shows. Anna Friel has had a career full of varied and diverse characters, and in celebration of Marcella‘s arrival on DVD and digital download from 20th June, we take a look at some of her best work to date.

Friel’s first major role in British TV saw her play Beth Jordache in the iconic, but now cancelled, Channel 4 soap opera Brookside. This is still the role most people think of Anna Friel in, especially as she made television history in kissing Nicola Stapleton – the first on-air lesbian kiss in a British soap. During her two-year run on the show, her character Beth was also victim to horrific abuse from her father, and was part of one of the most iconic soap cover-ups of all time – burying him under the garden patio, where he stayed for two years. In 1995, Friel won the National Television Award for Most Popular Actress for her work on the soap opera, and it was onwards and upwards from there…

In Anna’s first venture across the Atlantic (and the debut of her American accent), Pushing Daisies is a quirky, surreal TV series focusing on a man named Ned (Lee Pace) who has the ability to bring dead things back to life with his touch; be it a rotten strawberry, or his childhood sweetheart, Chuck (played by Friel). If Ned touches anything he has revived a second time it dies again, this time permanently, meaning that he can never touch the love of his life again. Racking up 17 Emmy Award nominations (and seven wins), this was Anna’s first nomination for Best Supporting Actress – this is certainly one to check out for followers of her diverse career.

Land of the Lost

In Land of the Lost, Friel took a step into American comedy, alongside the legendary Will Ferrell and Danny McBride. In the film, all three are sucked into a space-time vortex and spat back through time. The band of misfits now has no weapons, few skills, and questionable intelligence to survive in an alternate universe full of marauding dinosaurs and fantastic creatures from beyond our world. Anna plays Ferrell’s crack-smart research assistant Holly, who eventually proclaims her love for the scientist. Admittedly the special effects could use some work, but Friel holds her own against these two Hollywood heavyweights.

From one of the more saucy performances in her back catalogue, Friel plays Colin Farrell’s slightly ‘wild’ sister Briony in this sexy, stylish gangster thriller bristling with wit and brutal intrigue. London Boulevard stars Colin Farrell and Keira Knightley as star-crossed lovers who run afoul of one of London’s most vicious crime bosses, and have to do their best to avoid the inevitable consequences. Friel spends most of the film drunk and causing mischief, bringing a burst of cheekiness to the audience in every scene, and becoming an increasing nuisance for Mr. Farrell’s cheeky protagonist. It also sees Friel debut in a cockney accent! 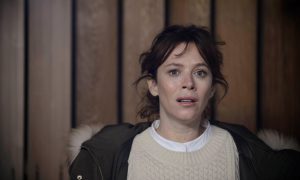 Marcella [Image via the Guardian]

From the mind of Hans Rosenfeldt, creator of the Scandi-Noir drama The Bridge, this hit ITV drama could be one of Friel’s most acclaimed roles yet, with her performance drawing plaudits through the realism and raw emotion that she brings to the title role. In her long awaited return to British TV, Friel plays a detective who recently rejoined the force, and becomes involved in the investigation of a serial murder case, bearing a striking resemblance to an unsolved case that haunts Marcella’s past. Everyone’s a potential suspect and victim at the same time, and Marcella’s fragile state of mind may even put her in the frame for the murder. A series with many twists and turns, you may even suspect yourself as the killer by the end!