June 17th will bring with it the return of Orange Is The New Black for its fourth season. As someone who wasn’t blown away by the relatively bland Season Three, I’ve spent a lot of time reading into the trailer, and looking online for what I can expect from season four. And thanks to that, my interest has skyrocketed!

Let’s look at where we left off – Daya (Dascha Polanco) has had her baby, but we don’t know where that baby is going to end up. Red (Kate Mulgrew) is back with her kitchen returned to its high standards; Pennsatucky (Taryn Manning) and Boo (Lea DeLaria) have a revenge plan for Coates (James McMenamin) after his rape of Pennsatucky; Morello (Yael Stone) got married and had vending machine sex with her husband; Crazy Eyes (Uzo Aduba) and Maureen (Emily Althaus) got ‘friendly’ in the lake; and Lolly (Lori Petty) wasn’t actually trying to harm Alex (Laura Prepon) – she’s just paranoid. 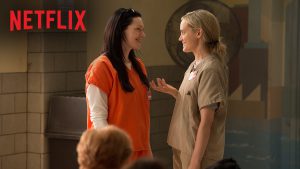 Piper + Alex = Meant to be together? [Image from YouTube]

The first and probably the most predictable thing is that Alex Vause is back. We can hear her talking to Red in the trailer. This was hardly unexpected, as her and Piper (Taylor Schilling) have been the two ‘main’ characters since the beginning. Given their history it’s understandable, but it would be nice for other characters and their lives to be focused on for a while instead. It’ll be interesting to see how Alex got out of the whole ‘Kubra’s assassin about to shoot her’ thing! Considering in Season Three, Piper completely ruined any chance she had with both Alex and Stella, it will be interesting to see where they take her love life. On the topic of other characters being focused on, Jackie Cruz, who plays Flaca, and Lea DeLaria, who plays Big Boo, have been promoted to series regulars, which is a promising start for getting more insight into their lives.

Another interesting sight seen in the trailer were busloads of new prisoners, meaning new cast members filling up brand new bunk beds, instead of those two-person booths they previously had. Overcrowding will definitely be their newest problem, and Caputo (Nick Sandow) is going to be even more stressed. And the guards seem to have been amped up – they used to just wear a shirt and trousers, but now it seems security has tightened up a lot, as they are seen at points with bulletproof vests, helmets, and what appears to be guns. Could this really be because of the new inmates, or is security tightening up after everyone escaped through the fence at the closing moments of Season Three? 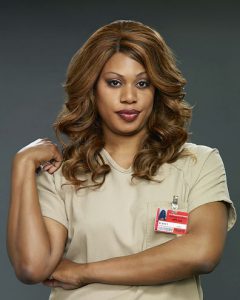 Piper also seems to have made herself a lot more enemies; the trailer shows her being threatened, and the photos show her gagged and being held down by Blanca (Laura Gomez). Perhaps all this is linked to the panty-smuggling business she set up last season? She’s also seen in front of line up of people, headed by the inmates who are far from happy with her. Could this be a search? Could the guards find out about her illicit behaviour?

The other big thing for me is Sophia (Laverne Cox). Last season she got sent to SHU, experiencing abusive hate crime after her transsexuality was outed, and pictures show her with no makeup and short hair. There was a lot of trouble around her getting her medication, so are Litchfield tightening up on her hormone meds, and perhaps the general freedom of the inmates?

Ever a show to tackle a broad range of ethnicity and cultures, another thing to note is that one of the new inmates appears to be Muslim, and she’s seen clashing with Taystee (Danielle Brooks) on arrival at the prison. Considering how open the prison is in terms of everyone showering together, and the sheer amount of sex that happens, it will be interesting to see how she fits in with everyone.

Also – this is just pure speculation – but one of the photos shows Poussey (Samira Wiley) talking with, smiling at, and generally looking adorable with an unknown inmate. Could she get into a relationship? Will there be yet another adorable lesbian couple in OITNB? I love her character and really want her to have a happy ending. But, there are three more seasons of Orange Is the New Black to follow, so there’s definitely time.

Orange Is The New Black is a Netflix Original Series, and will return at 7.01GMT, on June 17th.