Read more
You are at:Home»Culture»E3 Reactions: The Legend of Zelda
By Josh Nicholson on June 15, 2016 Culture, Video Games

Whenever a new Legend of Zelda game is unveiled, it never fails to blow me away. However, two years ago, when Nintendo first showed us the beginnings of what would become The Legend of Zelda: Breath of the Wild, the promises they were making seemed just too good to be true. Nevertheless, this week’s E3 presentation has proven to me that I had absolutely no reason to doubt the legendary game developer.

Firstly, the game’s visuals are still as gorgeous as they looked back in 2014. While the Wii U may be the weakest console of this generation, the beautiful cel-shaded art style makes any technical limitations practically unnoticeable. The light and shadow effects alone separate this game from others in the series; for instance, the way in sunlight filters through the trees is very striking. The varied environments showcased in the opening of the trailer were simply breathtaking, and goes to show that beautiful visuals aren’t dependent on a console’s power. 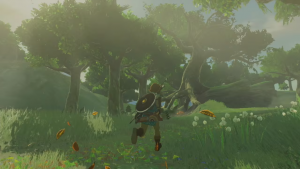 My primary concern when the game was first unveiled was that Nintendo would be unable to build the lively world that they promised. The Legend of Zelda: Twilight Princess suffered in that the game’s huge levels were left feeling empty and lifeless due to their size. However an interesting comment made by series director Eiji Aonuma during the E3 presentation settled this fear. When he was asked why he had decided on the subtitle Breath of the Wild, breaking the tradition of naming each game after a prominent character or item, Aonuma replied that he felt wilderness was the central focus of the game. Hopefully this suggests extra attention is being paid to the game’s world, creating a lively atmosphere across the many gorgeous environments shown in the trailer.

However, there have been some disappointments for fans. One rumour that didn’t come to fruition this E3 was that Breath of the Wind would introduce character customisation, particularly in introducing the option to play as a female. In my opinion this is a long overdue feature in the Zelda series – and shows Nintendo failing to represent a large segment of their audience in this flagship franchise. Similarly, rumours of full voice acting making its debut in the series were dashed in the first gameplay demo of the show, with the outdated text boxes making a reappearance outside of cutscenes.

The Legend of Zelda: Breath of the Wind looks set to be the ultimate adventure game experience. Though it draws inspiration from huge open-world games like The Elder Scrolls: Skyrim, at its core it is clearly staying true to the roots of Nintendo’s 30 year old series. While this is at the cost of some of the franchise’s outdated ideas sticking around, the game has three decades worth of the experience behind it, and only looks to be improving. This was certainly my most anticipated game of E3 – and afterwards, I am still hungry for more.

The Legend of Zelda: Breath of the Wild will be released for Nintendo Wii U in March 2017. You can watch the E3 trailer below.