Considering the status and popularity worldwide of the series, it has come as no surprise to anyone that EA have decided to unveil FIFA 17 at this year’s E3 convention, which took place yesterday (Sunday 12th June). With that, they have showcased a new mode of gameplay similar to the previous ‘Be a Pro’ mode from FIFA 16. In ‘The Journey’, you play as rising pro Alex Hunter, coming out of the exit trials to ultimately experience the ups and downs of a football career, and eventually become a world class star at a Premier League club.

My first reaction is that it seems to be FIFA meets The Sims. The new Frostbite engine does look much better than the previous Impact engine, and the graphic quality has clearly improved. The shots of inside stadiums complexes will give a lot more depth to this journey, and is something that FIFA has never done before. EA promises a variety of choices and decisions to make, presumably with associated cutscenes for each one. While some of the more unsavoury elements of a footballer’s lifestyle clearly won’t make the cut, it is nice to see EA offering some element of ‘Decide Your Destiny’- previously, ‘Be a Pro’ got incredibly boring because you could accelerate in ratings very quickly to become world class after one season, something which was wholly unrealistic. The fact decisions could genuinely appear to affect your development and career potential does finally add some gravitas and depth to the previous ‘Be a Pro’ mode too. 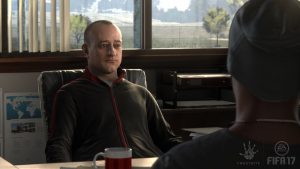 One major gripe that I can see people having with this new mode is the apparent lack of customization for the character. NBA 2K16 has already had a ‘Story Mode’ similar to this, so it is not as if EA needed to test this new idea in FIFA 17. The mode as a whole seems overwhelmingly popular in NBA, but the lack of customisation in regards to the look of the character is disappointing. While EA have confirmed you can change the player’s skin colour, haircut and some minor facial features, as well as having some choice of which club they start with, there is little else for you to decide. You have to be called ‘Alex Hunter’, as the included soundbites and developed narrative in the game only work with this name.

Whilst I appreciate not every name could be included, EA already uses a large name database in-game for commentary, and not being able to have one of those names does seem like lazy development. It is also a shame that you can only experience ‘The Journey’ at Premier League clubs – no chance to really develop at the lower levels, and rise up a la Jamie Vardy. This exclusivity to Premier League clubs does also quash any notion of a transfer away to somewhere like Spain and Real Madrid, like Gareth Bale’s career path.

I will admit, I have actively wanted ‘Career Mode’ to get attention from the developers, as it is far too often shunned in favour of the money-making ‘Ultimate Team Mode’. However, I can’t help but feel this seems a bit gimmicky – you will play the story once through, and then it will be redundant. Still, it’s certainly a step in right direction in regards to Career Mode having a genuine ‘Player Value’.

(P.S. Anyone else think Hunter might be based on an English star who broke through in February this year?…)

FIFA 17 will be released in the UK on 29th September 2016. You can watch the trailer for ‘The Journey’ below.