June can often be a dry month in terms of TV, but this week is far from dull, as one of Netflix’s most successful original series, Orange Is the New Black, explodes back onto the streaming service.

Our favourite ladies in orange jumpsuits are back, as we return for a fourth season at Litchfield Penitentiary. Seriously, I thought Piper (Taylor Schilling) was only meant to be inside for 15 months? Nope, she’s still in there, and she’s much changed from the mousy suburban woman that entered. Her turbulent relationship with Alex Vause (Laura Prepon) will surely still be a lingering problem, but this season the prison’s latest issue is overpopulation. Prison Warden Joe Caputo (Nick Sandow) will also have problems, as he continues to clash with Sophia (Laverne Cox). Orange Is the New Black‘s fourth season will be available in its entirety (ten episodes!) on Friday 17th June, via Netflix. 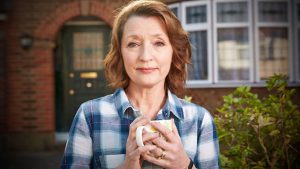 Stefan Golaszewski’s eccentric comedy Mum draws to a close this week. Following a year in the life of the titular ‘mum’, Cathy (expertly played by Lesley Manville), the series will wrap up on New Year’s Eve – a year after Cathy lost her husband. However, Cathy’s quiet New Year is ruined when her son Jason (Sam Swainsbury) and his girlfriend Kelly (played by another stellar actress, Lisa McGrillis) get into a big row about moving to Australia. You can see The Edge‘s review of its first episode here. The finale airs on Friday 17th June, 10pm on BBC Two.

In the world of books, this week sees the publication of Savernaz Tash‘s young adult novel, The Geek’s Guide to Unrequited Love. In this hilarious, romantic, coming-of-age novel, Graham tries to make his best friend Roxy fall in love with him after eight years of unrequited love. Taking inspiration from the worlds of Harry Potter and comic books, Graham comes to realise that real-life love stories are far more complicated than fictional ones. This sounds like a great read for all ages, especially if you’re not looking to be too challenged but still enjoy yourself! It is published on Tuesday 14th June.

Dipping briefly into the world of theatre, it’s no secret that massively exciting things are happening in London. The first previews of Harry Potter and the Cursed Child have started, and though we are keeping very tight lipped under the order of J.K. Rowling herself (#KeeptheSecrets), everyone has been saying that it has been loved by the audiences so far – even if they have had to remove live owls from the performance after one went rogue on the opening night! The Cursed Child stars Jamie Parker, Paul Thornley, and Noma Dumezweni, as Harry, Ron and Hermione, respectively. It officially opens in July at the Palace Theatre, but you’ll find it difficult to get tickets before summer of 2017 if you haven’t already got some!

Finally, this Sunday is very exciting as the E3 Gaming Conference is happening. It sees the two biggest players in gaming and technology, Sony and Microsoft, play off against each other, demonstrating some of their new devices, and previewing some exciting game releases. The Edge‘s Gaming Writers have come together with a preview of what is to come and a hint at what we are most excited for; see the preview here! E3 is live streaming on IGN this Sunday, 12th June.