Read more
You are at:Home»Culture»Review: Noises Off at the Nuffield Theatre
By George Seabrook on June 8, 2016 Culture, Theatre
60%
60
Farcical

Inoffensive for everyone, but destructively hysterical at times, with a few perfectly judged performances, this is just shy of actual greatness.

Explosions and physical comedy surpass language barriers. While Noises Off contains no explosions, for almost all of Act 2 of Michael Frayn’s farce, there is some of the best, most complex physical comedy to be seen on stage. It’s at this point that the play reaches its apex – while the rest of it, for me, proves how different types of comedy appeals different people.

The classic multi-award winning play, first presented in 1982, follows the misadventures of a touring theatre company, and their production of “Nothing On”, over three separate nights – their dress rehearsal, then backstage roughly six weeks into the tour, and finally their performance at the dreaded Municipal Theatre of Stockton-on-Tees. Everything that possibly could go wrong does. Brewing gossip, forgotten lines, cast members going missing, stage crew that are practically sleepwalking, injuries, explosions of jealousy over “secret” romances – every one of these problems threaten to utterly destroy the show in its various stages. More often than not, they do.

This is a play with a full cast of just nine, six of whom play actors, who are in turn playing their characters, while the other three are play director Lloyd Dallas (Orlando Wells), along with the two backstage-hands, Poppy (Ritu Arya), and Tim Allgood (Brian Lonsdale). From act to act, the central players of the dramas shift, giving all actors the chance to take their pratfalls, and intentionally fluff the lines. It’s a true ensemble piece, so the challenge for Nuffield‘s director Blanche McIntyre and her cast comes in making sure that each character can fill the space, without ‘ballooning’, no matter how melodramatic and insane the onstage action gets to be. It is an eternal challenge for theatrical actors – to capture the audience, without going so big as to bundle them in a bag, beat them with sticks, and throw them in a car boot. Naturally, this has mixed results. 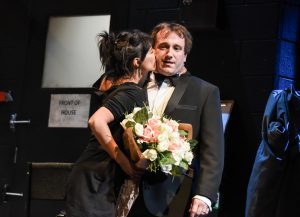 Farce as a genre, after all, requires crude characterisation. It’s part of the fun, and the cast gamely bring that farce to life. For example, both Sophia Nomvete as the amateurish Brooke Ashton, and Robin Bowerman as the drunken souse Selsdon Mowbray, bring huge amounts of energy to their characters, even if, in the case of the latter, that involves falling half asleep, and wandering about in drunken stupor. Wells’ performance as the narcissistic director, however, feels like the embodiment of one too many bad theatre director stereotypes, and lacks a subtlety that would have allowed the character’s barbs to truly zing. This does help though, when he gets his comeuppance following Act 1.

By far the standouts of the play are the aforementioned backstage-hands, played by Lonsdale and Aryu, and the rather remarkable Patrick Osborne as actor Garry Lejeune. Lonsdale spends the entirety of the first act practically catatonic as the tired stagehand Tim, so that when in Act 2 he springs onto the stage with a strong Yorkshire accent and a sweetly befuddled demeanour, the switch is disarming, yet totally welcome. This is in addition to perfect banter with both Aryu and Wells – though Aryu’s Poppy has a similar problem to Lonsdale, in that she’s woefully underserved in both the first and final acts, considering she’s so effortlessly empathetic. Apparently the only sane character on and off stage, Aryu wrings big laughs out of her exasperated, pithy one-liners.

Osborne, however, is onstage for the vast majority of the show, for Garry plays one of the main characters in the play within the play – a realtor named Roger, who arrives at what he thinks is an empty house, ready to poke around his client. Garry feels just shy of blatant parody: he exhibits a cockiness in his conversations with the director, and is possessed by exactly the same punch-swinging emotions as everyone else when the play reaches its second act, but without any idiosyncratic accent or delivery. It’s also undeniably due to the fact that Osborne has the greatest amount of physical comedy to actually undertake, and from the smallest gasp and move of his face, to the way he determinedly swings an axe and jumps around in Act 2, it’s completed with the dexterity of a master.

I keep mentioning Act 2, and here’s why – it made me forget any problems I had with the characters. In the overall play, the acting is good, but too many of characters feel like punchlines and stereotypes. Yet for roughly 40 minutes in the centre of the show, some of the most perfectly choreographed, complex and utterly chaotic physical comedy plays out on stage, as the characters come to a near silent, but intensely emotional, war with each other. It makes the first act feel like nothing more than a prologue, and sets what is an admirable third act up for failure, ending as it does on somewhat of a bizarre, bum note. The Nuffield’s co-production of Noises Off (with Nottingham Playhouse Theatre Company and Northern Stage) is a little uneven, and decidedly old-fashioned; yet for the utter dedication of the cast, and the undeniably talented direction of McIntyre in Act 2 especially, it’s one hell of a ride.

Noises Off is showing at the Nuffield Theatre, Southampton, until 25th June 2016. Tickets can be purchased here.