Thoroughly entertaining and worth a few chuckles at least, this new adaptation of Shakespeare's classic features strong performances, and fond memories of the good BBC of old.

With all the dark, stylistic nuances that are so rife in modern TV and film, a new comical and lighthearted BBC adaptation of A Midsummer Night’s Dream is a more than welcome arrival. A British cast made of both acting veterans and rising stars, and adapted by Russell T. Davies, the new creation plays homage not only to the bard himself, as part of the BBC’s ongoing 400 year anniversary celebrations, but to BBC productions of old. It has a Christmas early evening telly feel, and not without reason.

There is certainly a lot to praise when it comes to this latest adaptation. The world of A Midsummer Night’s Dream has been captured spectacularly, so much so that the world does not feel contained at all. The woods near Athens are seemingly boundless, with tracking shots galore, and Athens itself, with its peculiar combination of ancient and new, is a bizarre but not uncomfortable parallel. 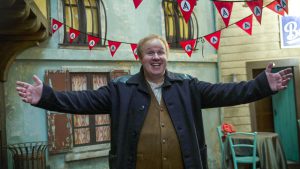 The same contradictions in dress, architecture and technology can be seen between the world of the forest and the world of Athens, making it a play of opposites to its core. There are lovers and fighters; the old and the new; and from working men, to a fascist dictator, to omnipotent fairies, the binaries are exploited to blur the lines in reality, embracing its dreamlike feel. The costume and set design are beautiful, and although parts of it feel fake, the pantomime and folly of Shakespeare has been expertly woven into this production. We are commanded by this play to suspend our belief, and embrace the farce. Where any production or imagery is lacking, the fantastic orchestral accompaniment makes up for it in spades, matching its screen accompaniment in dynamic and fairytale like fantasy.

It is potentially the most accessible version of the play I have witnessed, from A Level English Literature, to live performance, to its 1999 film. The play centres on four lovers, trapped within an unfortunate love triangle. Hermia (Priska Bakare) and Lysander (Matthew Tennyson) are in love, but Hermia’s father wants her to be with Demetrius (Paapa Essiedu) – who is also in love with Hermia. Helena (Kate Kennedy), besotted with Demetrius, exposes Hermia and Lysander’s plan to flee from Theseus (John Hannah), who states that she either marry Demetrius, or perish. Thus, the lovers flee through a fairy infested forest just outside Athens, where the two fairy lovers, Oberon (Nonso Anozie) and Titania (Maxine Peake), are equally quarrelling over the marriage of Theseus to the Amazonian warrior Hippolyta (Eleanor Matsuura).

Meanwhile, a band of working class people are practising a performance of Pyramus and Thisbe for the royal wedding. Oberon wishes to dupe Titania, and so, with the aid of his budding accomplice Puck (Hiran Abeysekera), they transform the hopelessly vain and self important workman Bottom (Matt Lucas) into an ass for a bewitched Titania to fall in love with. But, after witnessing the flight of the lovers through the forest, Oberon commands Puck to use the spell, a magic flower, on them too, while they sleep. It’s a dream within a dream; who knew that Inception had such classical roots, or that Puck’s use of breaking the fourth wall would be the original inspiration for Deadpool? 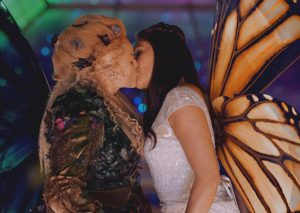 Confusing Shakespeare plot aside, however, the elephant in the room is yet to be addressed. Changes were made to the original, that were divisive to say the least. Russell T. Davies’ adaption incorporated gay lovers and a lesbian kiss that were very much absent from the original – yet the play is, on the whole, better for it. His modern and ‘politically correct’ treatment of the play is appreciated, as some of these changes seem so natural and fitting that it is a wonder that they were not thought of by the bard himself. Yet this agenda of politically correcting Shakespeare’s work seems wrong, and instead of honouring him, appears to shun and disgrace an author who was, for all intents and purposes, thoroughly ahead of his time. The changes are interesting for the plot and thought provoking, but they shouldn’t have been morally motivated.

Indeed, the most disturbing truth behind A Midsummer Night’s Dream is Demetrius’ false love of Helena. So desperate for love and a happy ending, the audience accepts Demetrius’ imprisonment to a woman he no longer loves. The most radical change in fact, would have been Helena’s acceptance that they were simply not meant to be. Yet we see Puck in the final scene succumbing to her wishes, and anointing him with the love potion. Should we not be teaching children that sometimes relationships just don’t work out, whether that be homosexual or hetrosexual, and that it’s okay to be on your own?

Overall, this new BBC adaptation is a success; an ode to the BBC, and all the adventure and fantasy we witnessed in classic shows like Merlin and Robin Hood. Suitable for both children and adults, it is a worthy adaptation when judged against its peers, and a worthy introduction into Shakespeare’s world.

A Midsummer Night’s Dream is available now on BBC iPlayer.