As the creative lovechild of virtuoso movie director Martin Scorsese and rock icon Mick Jagger, Vinyl seemed set for greatness. But contrary to the copious onscreen drug consumption, it’s a case of style over substance.

Whilst cinematic quality has become an expectancy for a HBO series, Vinyl’s aesthetic richness extends well beyond the likes of Game of Thrones or True Detective. The story world is tightly woven into the fabric of Scorsese’s 1970s; the New York City of Mean Streets, and Taxi Driver. With it come the drugs, the sex, the violence and, most importantly, the rock ‘n’ roll. Always a huge part of Scorsese’s oeuvre, Vinyl delves deep into the 70s music scene, with the occasional sidestep into the 50s and 60s. Scorsese directs the show’s two hour pilot episode, and his auteur style is faithfully carried out across the series’ remaining episodes. He has previously carried out tributes to the likes of Alfred Hitchcock and George Méliès in his work, but this series, based around a record label, seems like a homage to himself. This is present in the direct references to his films; neon lights gleaming off the surface of a yellow taxi cab, and more potently in his drug-addled protagonist, Richie Finestra (Bobby Cannavale). Like Scorsese, Finestra’s 1970s seem to be dominated by a dangerous mix of acumen and addiction.

Richie is the show’s first problem. Whilst Cannavale’s performance hits the right notes, it’s hard to care about his character. He’s not meant to be likeable, but by the end of the series you find yourself struggling to care in any way about his fate. Furthermore, the less than convincing acting of James Jagger in his starring role demonstrates nepotism of the highest order. Olivia Wilde seems to be employed in the show merely for aesthetic purposes, and sits very much in the periphery. Vinyl also does much for the business of celebrity lookalikes; Lou Reed, Elvis Presley, Andy Worhol, Alice Cooper, John Lennon and countless others rear their heads. They contribute to a novel style, employing a faint trace of reality amid blatant fiction. 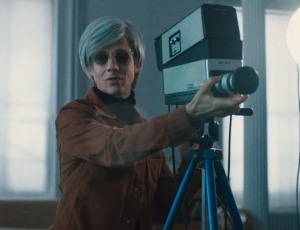 This is true to the show’s principle goal, seeking to serve as a highlight reel of rock ‘n’ roll history, dipping into notorious incidents, and thrusting some of the best music of the 20th century at the viewer. Whilst the occasional, extra-narrative musical interludes can seem like overkill, most of the music used in the show fits neatly with the images and settings on screen. The soundtrack is definitely a highlight and, I would argue, it is reason enough to watch. In high definition, the Blu-ray version calls attention to the grainy film stock used throughout, adding to the period detail. It also highlights the strength of Scorsese’s influence, with the detailed rendering of the 70s being another strength. His characteristic deployment of comedy and comic violence are also present, and this aids in distinguishing the show from much of the drama fodder on TV at present. The ‘Inside the Episode’ additional material adds some slight background to the episodes, but these are all available on HBO’s YouTube channel, so don’t offer much of an incentive to purchase the physical copy.

In spite of its visual and aural delights, Vinyl is distinctly lacking in any real plot. There’s a crime narrative bubbling away, fractured relationships, blooming romances, and the rise of a fictitious band. But the truth is, it’s hard to care. If you’re not a music aficionado, or Scorsese lover, then Vinyl isn’t for you. Even those who consider themselves to be both should think twice about stumping up the money for the Blu-Ray. Overall, it’s like a long ballad without a memorable chorus; admirable but forgettable.

Vinyl is released on 6th June on Blu-Ray and DVD.