Read more
You are at:Home»Culture»One plot twist too far? Anticipating the future of The Blacklist
By Anneka Honeyball on June 4, 2016 Culture, Television

For the first two seasons of The Blacklist, fans were utterly arrested by the unique and mysterious connection between its two protagonists: The Concierge of Crime, Raymond Reddington (James Spader) and FBI Agent, Elizabeth Keen (Megan Boone). When Reddington entered Elizabeth’s life, the hook that reeled us all in was the eerily ambiguous bond between these two polar opposites – and it’s a bond that has been interpreted in several different veins. One of the most common fan perspectives, and perhaps the one that has been most rooted for throughout the show’s run, is that Red is in fact the long-lost Father that Liz couldn’t remember. However, after the conclusion of Season 3, quite where the show is going is anyone’s guess.

Unpredictability and the inclusion of ‘shocker’ plot twists have become something of a popular trend in recent television history. Of course, cliffhangers and plot twists have always existed – but for some reason they have exacerbated with shows like Sherlock, Game of Thrones and The Walking Dead. And though this technique is undoubtedly engaging, in the case of The Blacklist, it just feels a little too insincere for my liking.

The season took a very sudden and dramatic turn in its 20th episode, leading us (and the majority of characters) to believe that Elizabeth Keen had died following the high-octane complications of the birth of her daughter, Agnes. We watched as Reddington wept over her and stumbled from the ambulance, trembling with grief. We watched as her fellow task-force members mourned at her funeral. And although it was frustrating and beyond belief, there was a certain gravitas to her supposed loss. Though the episodic formula that we had all come to know and love had supposedly been shaken up beyond repair, there was something poignant and interesting about such a plot twist. Without Elizabeth – who had been set up as the one mediator between the world’s most wanted criminal and the bureau of state security – how could the task-force go on? What would Reddington do? It opened the show up to a whole new realm of possibilities… for about five episodes – by which time the writers had decided to flip it all around. 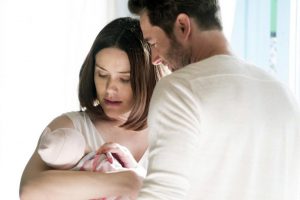 It all worked out…. right? (Image via IBtimes.com)

In the season finale, it was revealed that Mr Kaplan had managed to deceive Reddington and help Liz fake her death so that she could scarper to Cuba, where apparently she would be safe. And though this is the outcome that many fans had been hoping and praying for, there are several reasons why I see Liz’s survival as something of an insincere cop-out. Firstly, the very notion of a central, seemingly ‘untouchable’ character dying and then miraculously coming back to life is already a fairly tired TV trope. We saw it only a few weeks ago in Game of Thrones, when Jon Snow was revived by Melisandre. We also saw it two years ago, when Sherlock turned up at a restaurant and surprised John Watson with a drawn-on moustache and the words “not dead.” But in both of those shows, there was at least a sense of genuine rationality. Game of Thrones is a fantasy series in which it isn’t impossible for characters to be revived by magic. Sherlock is based on a time-honoured series of short stories that were constantly attentive to scientific and analytic deductions. The Blacklist meanwhile, is a crime drama that went for a gamble so dramatic, that it put its main protagonist’s character into question.

Motherhood can lead a woman to do extraordinary things, but in the case of Liz, it just doesn’t feel right. This is a character that is empathetic to a fault; she’s caring, forgiving and loyal – and you mean to tell me that she would fake her death and abandon her husband, her friends and the mysterious father figure that she found in Reddington? Not to mention her newborn, premature baby – the source of all this paranoid need to get somewhere ‘safe’! Liz has wanted a child for as long as we’ve known her- and then, as soon as she finally is a mother, she decides the best thing to keep her daughter safe, is to pretend that she’s dead for months? It just doesn’t match up with what we’ve previously been lead to believe about this character.

The fact that Liz is alive also raises questions about the show’s confirmed spin-off – The Blacklist: Redemption – which is said to revolve around Tom Keen and Susan Hargrave. In the season’s penultimate episode, Reddington revealed that Susan was in fact Tom’s long-lost Mother, who was under the illusion that her child was dead after being abducted 28 years previously. With Liz out of the picture, and Tom’s vengeful curiosity about his former life, the spin-off was beginning to make sense. It was beginning to sound interesting. But then, in the finale, Tom disappeared after being struck by one of Alexander Kirk’s men. Agnes is nowhere to be seen, and Liz is under the custody of Kirk himself – who drops yet another bombshell; that he is her Father.

If that all sounds perplexing and confusing, that’s because it is. This show has always revolved around unanswered questions and unsolved mysteries – but with these kind of revelations flying about with hardly any real consequence or further details, the show has become at odds with itself. Beyond rescuing Liz and Agnes, it’s hard to recognise what direction the show, or its planned spin-off, is going to go in. Having watched and loved the show and its characters for this long, I can only hope that the future of The Blacklist will eventually untangle and flourish once more.

The Blacklist broadcasts in the UK on Sky Living.