Fire Emblem Fates is an excellent follow-up to the franchise's reboot in 2013. However, while the deep, tactical gameplay is as good as ever, it is let down by odd decisions regarding the game's release.

Up until a few years ago, relatively few people had heard of Nintendo’s Fire Emblem. Even among the biggest gamers in the West, this deep, tactical role-playing series, from Japanese game developers, was a hidden gem. However, the 2013 reboot of the series Fire Emblem Awakening, for the 3DS, changed this, when it became the highest selling game in the franchise. This trend seems to be continuing with Fire Emblem Fates, the recent follow-up, which has nearly outsold its predecessor. This newfound success is nothing if not well deserved, as the newest entry to the series continues to deliver the polished gameplay experience that Nintendo is so well known for. 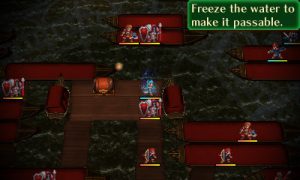 Veterans of the series will recognise many of the central aspects of the gameplay, as the core concepts remain largely unchanged from the franchise’s last outing. From a top down perspective, players control individual members of their army in a turn-based tactical battle against various enemies. While the first few battles may seem simplistic, Fates quickly reintroduces many ideas that deepen the game immensely. The support system alone, which allows your units to defend each other in battle dependent on their individual relationships, means moving your soldiers around the battlefield feels more like a fast-paced game of chess.

However, the most central, and also relatively unique, aspect of the game is the unforgiving, permanent death that greets members of your army. While this may seem like an unnecessarily harsh way of playing a game, it may be the reason Fire Emblem is so unique in the genre. The constant risk that any character could be permanently lost if you make one wrong move, adds huge weight to every decision you make in battle. The newer entries in the series do have the option to deactivate permanent death, but in my opinion this removes much of the excitement and tension involved.

This is not to say that the game fails to innovate on the classic Fire Emblem formula, either. All of the traditional Fire Emblem games focus on a western, medieval setting, featuring knights, swords, and longbows. However, Fates moves beyond this, setting the game in a fantasy version of feudal Japan. This means that traditional weapons, swords and lances, have been replaced by katanas and naginatas. While largely an aesthetic change, as the new weapons largely serve the same purpose as their western alternatives, the game benefits greatly from a thematic change, and makes it feel unique among the series.

The only criticism that can be levelled against Fire Emblem Fates is Nintendo’s strange decisions concerning the game’s release. Unlike previous entries to the series, Nintendo elected to release Fates in two separate versions – Fire Emblem Fates: Birthright, and Fire Emblem Fates: Conquest. The two games, both released as full priced cartridges on the same day, attempt to tell two halves of a whole story. While Birthright follows the story of the Hoshido in their war with the Nohr kingdom, Conquest sees you taking on the role of the other side in the same conflict. Admittedly, this is rather ambitious, but this way of release comes across as a poor attempt to double profits, especially as Fates was originally announced as one game, back in 2015. Worsening this is the upcoming release of a third version of the game, Revelation, a DLC which promises to complete the story. By releasing Fates in this way, Nintendo has torn apart a story, which could be told much more efficiently in a single game.

However, this should not discourage fans of the series from buying at least one version of the new game. The core gameplay that makes Fire Emblem such a memorable experience is well recreated in Fates, and if you enjoyed Awakening, you should feel right at home here. If you are looking for a deep 30 to 40 hour game to sink your teeth into over the summer, Fire Emblem Fates‘ complex tactical play is for you.