Read more
You are at:Home»Culture»Review: Mary Poppins at The Mayflower Theatre
By Georgia Simpson on June 1, 2016 Culture, Theatre
100%
100
Supercalifragali...

A must see! This all singing, all dancing musical is a riot from the loud opening number to its emotive conclusion.

For the next three weeks, the Mayflower Theatre is taking audiences on a joyous adventure down Cherry Tree Lane, to visit the Banks family and their mystical, magical, wonderful nanny; Mary Poppins.

This new Cameron Mackintosh national production of the classical musical follows in the footsteps of the beloved 1964 film, including memorable and rousing songs like ‘Jolly Holiday’. Julian Fellowes (of Downton Abbey fame) has penned a new script, with an innovative storyline, and musical numbers which fit seamlessly alongside those emotive, timeless classics of the past. Notably, there is the heart-warming ‘Anything Can Happen’, and Mary Poppins’ brand new introduction song ‘Practically Perfect’. 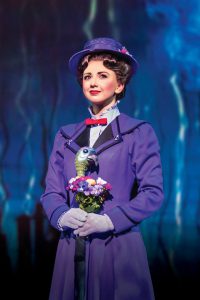 Zizi Strallen as Mary Poppins (image via the Mayflower Theatre)

Zizi Strallen is perfect casting as Mary Poppins, oozing class, sophistication, and that hint of magic that recaptures the great Julie Andrews. She leads the production fantastically, in both style and song. A particularly emotive number is ‘Feed the Birds’, which makes even the youngest audience members take note, and engage with Strallen as she hits the high notes while remaining composed. She is the perfect nanny, with her carpet bag of magic, which is accentuated even further when she seemingly floats above the audience saying goodbye to the Banks family. Truly spectacular.

The musical numbers themselves are all fantastic. I felt exhausted just watching the cast speed through the dance of ‘Supercalifragilisticexpialidocious’ – impressive is an understatement. Another musical number that should get praised is ‘Step In Time’, which sees the chimney sweeps of London tap dance across the rooftops. The energy and fast pace from the dance crew, led by Matt Lee as Bert, is fantastic, and got the whole audience chanting along.

The set design should also be noted. The Banks’ residence is like a doll’s house in the way it comes out into the audience, welcoming them into the Banks’ world, and providing an immersive experience. The set is as magical as the rest of the production, with the moving beds, the magical carpet bag reveal, and the humorous cake baking scene, which sees the Banks’ kitchen destroyed then put back together after just ‘A Spoonful of Sugar’.

With a darker tone than the Disney adaptation of P. L Travers’ books, Mary Poppins’ musical version adds to the nostalgic feel of the film, while giving a contemporary take on the nanny. Full of dance and singing, this is a truly inspiring cast, with a set design that invites the audience into the wonderful world of Poppins. This is arguably the best production the Mayflower has seen all year – definitely not one to miss!

Mary Poppins is at Southampton’s very own Mayflower Theatre until 19th June.