Read more
You are at:Home»Culture»Flashback: An Ode to Parks and Recreation
By Sophie Trenear on June 1, 2016 Culture, Television

Seven years ago on the 9th of April 2009, the pilot episode of a modest little NBC programme aired, introducing the perky, blonde-haired deputy director of the Parks and Recreation department in the fictional town of Pawnee, Indiana. That deputy director was Leslie Knope (Amy Poehler), and the programme the one and only Parks and Recreation. Hit the fast forward button to six years later, on the 24th February 2015 (my 18th birthday, no doubt), and the programme’s finale aired to an audience of 4.15 U.S. viewers, all doubtlessly with eyes wet and hearts full. Parks and Rec grew out of what was a very average first season to become an internationally loved show, quoted by many, and remembered by all. 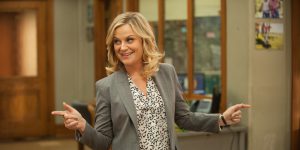 Leslie Knope is the Queen of Optimism. [Image from Bustle.com]

Parks and Recreation is the story of, as expected, Pawnee’s department of Parks and Recreation, stylised as a ‘mockumentary’ – a fake, humorous documentary. It evolves to similar styles of shows like The Office, with the fly-on-the-wall type feel disappearing quickly as the second season learns from the first’s mistakes. From then on, the camera is neither invasive nor a mark of comic intrusiveness, but it grows to become an intrinsic part of this little group of government workers. We as an audience become part of their group – and that’s exactly where we want to be.

I was a tad late to the party, only watching it for the first time in 2014. Nevertheless, something struck me about the show which I’m sure also struck many others: there isn’t a single badly written or neglected character. Sure, Tom Haverford (Aziz Ansari) is an arrogant cretin who doesn’t know how to treat women at the start, but we still love him. Sure Jerry (Jim O’Heir) is a somewhat incompetent pushover of an employee, but we still love him. And sure April (Aubrey Plaza) is a sarcastic, careless assistant, but – well who am I kidding, everyone loves April.

The best thing about Parks and Rec is its creation of flawed, vulnerable characters, who are capable of making mistakes, and indeed, the completely wrong decisions. They make the wrong friends, choose the wrong people, but they’re still loveable. And this is pretty much from the off-set too – although it’s a shaky first season, the show is all rise from that point onwards. I challenge you to find one character you don’t relate to at some point. It’s impossible – trust me, I’ve watched the show six times through now, focusing on a different person each time. These characters are role models, and role models I’m going to always be looking up to, wherever I am in life. 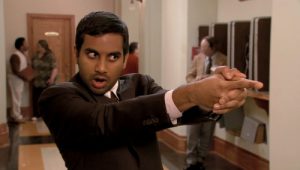 We all know how hard it is to create a show where every episode has a different moral to learn, and to make that lesson clear to the viewer. I mean Scrubs did it relatively well, but having a voice-over at the end of each episode clearly stating the intended message got a tad repetitive after, like, six episodes. How I Met Your Mother was much of the same, although slightly more original with the whole addressing-the-kids-and-not-the-audience thing. But, please, speed it up Ted! The point is, how can TV sitcoms make sure their moral voice is heard without having to dumb down the comedy?

Parks and Rec makes damn sure its voice is heard – and without patronising its audience either. It doesn’t ever resort to cheesy gimmicks, or sudden, unnatural and unimaginative changes in tone. It never looks down at its audience, or throws in eyebrow-raising plot twists to keep up the pace (ahem – I’m looking at you HIMYM). Parks and Rec is the result of careful planning and a deep respect for its audience, with each character having their own morals which they stick too, and each season having an overarching theme to guide its message. It doesn’t muck around or pretend to be something deeper than it is – and that’s exactly how it succeeds.

The morals, the plot, the amazing scripts, the character chemistry, the diverse sets, the smart humour, the brilliant finale – seriously, guys, this show is amazing, and a must-watch.

Parks and Recreation originally aired from 2009 to 2015 on NBC. It can be watched now through Amazon Prime. See some of its funniest moments below.