Doom is one of the most refreshing shooters in years, perfectly blending old-school shooting mechanics with more contemporary features.

In the same week that saw the release of a narrative masterpiece (Uncharted 4), another game from the complete opposite side of the spectrum also debuted: Doom. If Uncharted is the modern incarnation of Indiana Jones, then Doom is a combination of all the ridiculous action movies of the 1980s. It is one also of the biggest surprises of the year, one that functions as a straight-up, old fashioned shooter for the modern age. It puts gunplay up on a pedestal and while it has a story, it is more concerned with throwing as many varieties of demons at you as possible. It has some of the best weapons you’ll find in a first person shooter, and its high intensity and speed make it a must play. 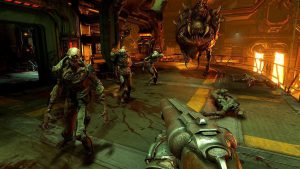 The team behind Doom, id Software (also the original creators of Quake), are the same people who made the great reboot of Wolfenstein in 2014. So it is suitable that they would bring another one of their classics into the modern era. The premise of Doom is simple: you are the ‘Doom Marine’ and wake up in a research facility on Mars. The gates of hell have been opened and demons have killed everyone inside. It’s up to you to quell the outbreak. You pick up your armoured suit and embark on a killing spree. The carnage then ensues almost immediately. The beauty of Doom is how all its different mechanics combine to make the act of killing endlessly fun.

The game has numerous weapons, each with two secondary fire modes. The heavy machine gun can shoot micro missiles, the shotgun can fire a grenade and the chain-gun can produce a mini drone. These are just three of the many variations you can unlock. Ammo is not scarce, but nor is it plentiful, so you will have to rely on the brutal melee kills or your trusty chainsaw. To recover health, you will mostly have to wear down your enemies so that you can perform a finishing move. These brutal executions are visually rewarding and essential to maintaining your health levels. Some are completely over the top, whether you’re feeding a demon his heart or beating another to death with his own arm. All of these features are complemented by Doom’s quick movement speed, which you are forced to rely on due to the overwhelming amount of enemies you’ll encounter in a single firefight. Underlining the whole act of violence is a relentless and loud heavy metal score, which is the ideal accompaniment to what’s happening on-screen. All elements of the gunplay combine beautifully and create a flow of systematic slaughter. The excellent open level designs gives you many ways to tackle the combat, while also providing an incentive to explore and find collectables. 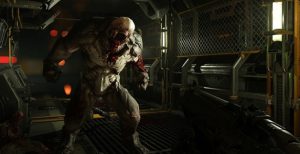 The enemy design is great, from small zombie like creatures, to armed soldier types, to heavier devil like beasts. The look of these monsters is disgusting, which helps add to the enjoyment of brutally dismembering them all. Each enemy poses its own challenge and their skills compliment one another perfectly. The demon I personally hated fighting was the athletic and powerful ‘Hell-knight’, as it would pursue me relentlessly.

Doom is a challenging game even on its lower difficulties and it is immensely rewarding to complete each encounter, as you are forced to rely on your pure shooting skill, something most modern FPSs don’t make you do. You are rewarded after each fight with points to spend on suit and weapon upgrades, which are given in various amounts depending on how well you killed a group of enemies.

Doom’s narrative takes a back seat to all the action, but it is present. It is up to you to save Mars and venture into hell to close the portal. You are guided by several off-screen companions who provide some context to the slaughter, which can also be found in a detailed lore journal in the start menu. These result in some comical exchanges, such as the Doom marine being told to handle a container with care, an instruction that he blatantly defies as he breaks it instead.

The game also features two multiplayer components. The first is the standard FPS multiplayer found in most shooters. In this respect, Doom is fairly unremarkable, utilizing the commonplace weapons and cosmetic progression systems found in most multiplayer games. What sets it apart is that you can play as some of the demons from the single player through power-ups spawn in the map. Overall, it’s fun to use Doom’s guns in a multiplayer arena, but this still falls short of anything spectacular. What is a great feature however, is SnapMap. This is where people can upload their creations for others to play. A whole host of things can be created, from co-op horde modes, to parkour arenas and even homages to classic Doom levels. Already there is plenty of great user-generated content to play through and hopefully it will be expanded upon in the coming months.

In short, Doom provides the consumer with a lot of content. It has a great campaign mode, showcasing some of the very best weapons in video games and some of the most satisfying gore to boot. It is relentless and highly re-playable, but also challenging enough for it to be a refreshing change from the bog-standard contemporary shooter. The multiplayer options are fun and SnapMap adds a steady stream of community created content, which will add extra hours to the already lengthy campaign. It is great to see the successful comeback of two of the granddads of the first person shooter genre, in the form of both Wolfenstein: The New Order and Doom. With these titles, id Software has shown how to blend old mechanics with the new and make something very special in the process.

Doom is available on PlayStation 4, Xbox One and PC.