Read more
You are at:Home»Culture»Review: Guys and Dolls at the Mayflower Theatre
By Laura Cox on May 21, 2016 Culture, Theatre
100%
100
Amazing

For an evening of excitement, dance and great songs, Guys and Dolls is ideal.

The much-loved musical Guys and Dolls reached Southampton’s Mayflower Theatre this week as part of its UK tour. Set in New York’s glittering Broadway area, the story follows the clash of two very different worlds: the underground scene of New York’s gamblers and their ‘dolls’, and the efforts of the Salvation Army as they try to steer the city’s sinners onto a better path.

Audiences are transported to New York through the show’s excellent stage-design, which is comprised of a series of glittering 1950s adverts. The sheer scale of this backdrop is evocative of the ‘Big Apple’ and its commercial appeal. The production was simple but very effective, and different adverts were illuminated to correspond with different moments in the plot. 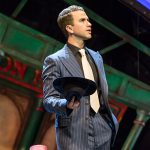 Richard Fleeshman, who has previously starred in Coronation Street, played Sky Masterson, the sinner with a good heart underneath his ‘bad-boy’ facade. While other characters emphasized Sky’s willingness to bet on anything and everything, his character’s measured responses demonstrated a greater depth. The rash, ruthless gambler others made him out to be wasn’t represented by Fleeshman when separated from his gambling associates, and this helped the audience to support his development throughout the plot.

Anna O’Byrne as Sarah offered a similarly compelling performance as her character navigated the tricky situation of falling in love with the wrong person. She was accompanied by Lucy Jane Adcock as the long suffering but loveable showgirl Adelaide, whose only wish is to settle down with Nathan Detroit (Maxwell Caulfield) after a very lengthy engagement. Detroit, the ringleader of the city’s covert craps games, is thus forced to choose between his love of gambling and his fiancée. 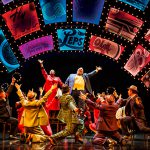 Guys and Dolls is well known for its stand-out soundtrack, and the cast on this tour did not disappoint. Audiences were engaged throughout, and Richard Fleeshman’s solo songs were executed brilliantly. ‘Sit Down You’re Rocking the Boat’, performed by­­ ­Jack Edwards as Nicely Nicely Johnson, was absolutely fantastic. I’d say that this was my favourite song from the whole performance, and it was hugely popular with guests, many of whom sang along.

The ensemble, who were choreographed by Carlos Acosta, were also a must-see element of the show, with their routines captivating the entire audience. The Havana dance scene was spectacular, and it moved the story forward through movement instead of dialogue.

Overall, the show offers a highly entertaining, engaging and exciting evening out. It’s a must see, and I wouldn’t hesitate in recommending it to others!