If this carries on, we could have our best season of Thrones yet.

This review contains some, you know, spoilers and stuff.

Series of 6 has gotten off to a ruddy good start with the foot planted firmly on the gas pedal. You wouldn’t be blamed for thinking that at some point it’s going to wind down and pander a bit, before ramping back up in the final two episodes, but if that’s the case, episode four doesn’t show it. 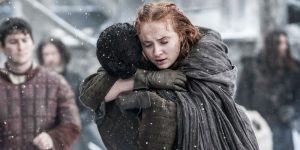 A warm embrace in the face of cold adversity. Image via www. Screenrant.com

Picking up from last week’s episode, wherein we concluded as Jon declared that his watch had ended, we are thrown right back into the mix at Castle Black. The episode begins with arguably one of the most beautiful and heartfelt moments we’ve witnessed over the duration of the show. FINALLY! We have the reunion of Starks Jon and Sansa. Both Kit and Sophie have evolved as Thespians in their roles and without that maturing and growth, this moment could’ve fallen depressingly flat. Fear not however, because it wallops you right in the feels when they run into that warm and tight embrace. It felt like the summation of all they had been through and it was a very smart move by writers Benioff and Weiss, equally balancing fan service and plot advancement. However, the warm smiles and hugs don’t last long, as Sansa looks to exact revenge on Ramsay, who has now assumed power over Winterfell and taken up position as Warden of The North. Her empowerment and drive is, again, a very astute move by the writers. For too long, Sansa was on the back end of some horrific spouses and was carved out as a damsel in distress who needed a male saviour. Now it’s her turn to rouse the courage out of Jon, who has lost all sense of purpose. 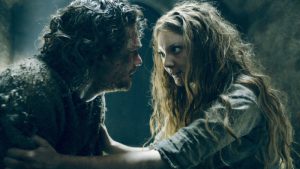 Bowed, bent but not broken. Image via Tvline.com

Back in King’s Landing, we have another family reunion of sorts. Still imprisoned by the Faith Militant, Margaery is finally let out of her cell to see Loras. A cowering wreck of a man, he’s far from the swaggering princely young man that we’ve grown accustomed to. He has been broken and it’s down to his sister to pick up the pieces. It was a pivotal scene for Margaery, as we see she has lost none of her ingenuity, despite the situation. In addition to this, we are treated to another segment with the High Sparrow. Jonathan Pryce maintains his underrated brilliance as the cunning and sinister religious nut. Every exchange he shares with any character in King’s Landing is smothered in delicious tension and is always captivating, whether he spars with Cersei or manipulates Tommen, he’s not one to be trifled with. King’s Landing is heading for civil war and with the Tyrells and Lannisters joint goal of stemming a group of fanatics rise to power; blood is going to be spilt. A lot of blood.

Without Dany’s presence in Meereen, the city finds itself in turmoil. One of the burgeoning problems here is that the Masters have taken back Slaver’s Bay. Much to the dismay of both Greyworm and Missandei, Tyrion and Varys understand that democracy is a slow and painful process without the presence of, say, some dragon fire. Tyrion knows how to play the game and that knowledge is going to be much more beneficial in the long run than starting a bloody war to regain control. All the players here, namely Peter Dinklage, continue to assert their prowess. It’s scenes such as these, where not much actually happens, where we get to marvel at some of the acting that is not just sprinkled across the show, but is the core of it. Plus, it has Varys. Varys is my favourite. #TeamEunic.

Rounding up our tour of brother/sister reunions is Theon’s homecoming. A far-cry from his first trip back to the Iron Islands, Alfie Allen’s Theon is now a tortured soul. Having been experimented on and brainwashed into oblivion, he’s a shuffling snivelling wreck in the eyes of the Ironborn. Worsened by the fact that he botched his own rescue mission, this reunion is especially painful. Despite this being his home, he is very much a stranger. Yara no longer sees her brother in Theon, only a cowering shadow of his former self, but she still accepts him because they are all they have now. Allen continues to convey this extraordinary transformation in Theon’s character, by making it so heartbreakingly real.

Much like Tyrion and Vary’s bromantic bickering in season 5, the budding, if not begrudgingly so, partnering of Iain Glen’s stoic Jorah and Michiel Huisman’s Daario is certainly one of the episode’s more comedic sections. Both characters are united by their love for Dany, but that doesn’t necessarily mean that they are bound to get along, It’s fun to tag along in their suicide mission to rescue the queen from the Dothraki horde and this provides much of the episode’s action as they attempt to sneak her out. It is here where we get this week’s rousing finale. The season has currently been pretty Dany-lite (much to the behest of some) but if this episode does anything, it’s that it reasserts her position as one of the main players. Following this season’s trend of empowering its women characters and actually giving them things to do, her transition from prisoner to this almost goddess-like figure amongst the Dothraki is impressively done. Her mistreatment and misjudgement by men has been a common theme in her rise to power and it is continued here. As the Dothraki leaders boast about mistreating and raping her, she grasps the opportunity to assert her dominance, burning down the temple of the Dosh Khaleen. 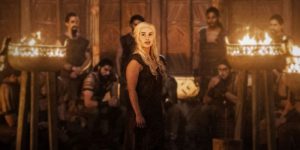 Mother of Dragons. Image via Screenrant.com

However, and this is my biggest issue with the episode, we do feel as though her story has hit the reset button. Akin to the end of season 1, she appears from the flames unburnt and triumphant to a group of Dothraki. Whilst this was a completely shocking and mouthwatering reveal previously, here it feels much like a retread. Whilst admittedly she does now have a much larger army, I feel as though this might be the peak of her advancement this season. That being said, we still have 6 more episodes, so all remains to be seen.

We also see an interesting development with Littlefinger, who is finally brought back into the fray. As well as this, we are also treated to our weekly dosage of Ramsay being a bastard, both literally and through his actions. His killing off of a returning character felt oddly non-consequential, as he teeters dangerously on the edge of simply becoming a one-note villain, something the show has thus far been bereft of.

Game of Thrones airs Mondays at 9pm on Sky Atlantic. It is also available to buy through NOW TV.