The series continues to show how it can be captivating even in its mid-season episodes.

‘Oathbreaker’ proved to be an episode centred around theory and speculation, more so than plot development. Indeed, each story ended up asking more questions than it actually answered.

Jon is now completely alive and kicking at The Wall, coming to terms with his untimely death and punishing those responsible, culminating in his retirement from the post of Lord Commander. The quick turnaround in fixing Jon’s death has been a confusing aspect of this season. With the problem being solved in just two episodes, it almost negated the suspense from whether or not he would return, and in a series where death is typically very finite, it was a moment where the show seemed to transform into another dime-a-dozen fantasy series. Thankfully, the final scene of ‘Oathbreaker’ seemed to disprove the idea that it might have been rushed to please fans as quickly as possible, and instead that it may function as motivation to push Jon onward to another storyline.

When Jon first wakes up, Melisandre asks him what he saw in the afterlife, but Jon can’t fully reply, as he reports that there was nothing. It’s this nothingness that Jon comes to terms with over the course of the episode. He witnesses Alliser Thorn, the main culprit of the murder plot, stand by his actions with pride before being sent to his death, and Olly killed without even a final word. While in another series this scene might be shown with a tone of vindication, Game of Thrones uses it to create a crucial turning–point for the series and the characters. Jon hears people consumed by their oaths, honour, and grudges; all of which he now realizes come to nothing in the end. It’s a brilliant scene that highlights how, despite the ever-growing popularity of the show, HBO haven’t failed to bring good directing and writing to the small screen. 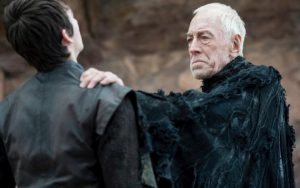 Bran’s flashback series continued with Ned Stark’s infamous sword fight with The Sword of Morning. These scenes are great examples of how series can build upon their characters through the past, without rewriting it to suit their needs. We see Bran learning new capabilities of his powers, now being able to send whispers into the past, which will no doubt become crucial in later episodes. We also gain a new perspective on the late Ned Stark, as it throws doubt on his otherwise infallible sense of honour. This is clearly leading to the reveal of a certain fan theory that is all but confirmed by now. I won’t mention it, as you are either sick of hearing about it, or just don’t know. I would prefer the latter. This scene also offered one of the best sword fights Game of Thrones has seen yet. They seems to have slowed down the number of smaller action sequences in the later seasons, in favour of big dramatic ‘Hardhome’ moments, but it’s still a joy to see such well shot, edited, and choreographed fights.

Arya also got action scenes this week, with her training escalating to a full-on sports movie montage. Her storylines have fallen behind the last two seasons, mainly as the series doesn’t seem to have much for her to do. Fortunately, this episode finally felt like substantial progress had been made, and it’ll be interesting to see Arya returning to her semi-normal self, in what is hopefully assassin training. Rickon, the least popular Stark child, also got a scene this week, after being missing for three whole seasons. He was promptly handed over to the loveable Ramsay Bolton, for what will surely to be an entirely pleasant experience. Ramsay seems to have hit peak evilness recently, which no doubt means that his fate will soon be sealed, and with Jon coming from the North, and potentially the Greyjoys from the South, it’ll be interesting to see if Rickon is actually given a significant part to play. 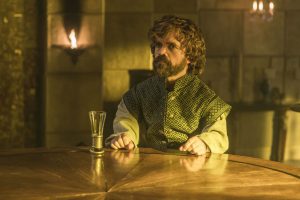 The Kings Landing and Mereen scenes seemed to act as a State of The Union this week, highlighting who is in charge and the threats opposing each institution. Tommen’s scene with the high sparrow further proved his gullible nature, as well as the High Sparrows peacefully manipulative quality, while Varys and Qyburn’s moments helped to demonstrate that, despite whatever happens, whispers never fail to spread. These were also accompanied by two council scenes, both of which attempted to cover their rather uninteresting nature with humour (i.e: A fart joke and Tyrion), which worked to varying degrees of success.

Nonetheless, there were some filler scenes this week. We were reminded that Sam is still alive and that he still likes Gilly… that’s about it. Then we were treated to further proof that Daenerys’ storylines are invariably dragged out as long as possible, just to provide an excuse for why she can’t go to Westeros yet. With the inclusion of non-boring side characters to her story last season (Tyrion and Varys), things were looking bright, yet this episode confirms more than ever that despite the love of fans, the series has no desire to make a compelling Daenerys narrative until the moment it suits them.

Overall it was another strong episode. It showcased the series’ technical ability in both its action and emotional pieces, while continuing to progress the characters significantly. It fell down due to certain obligatory filler scenes, as they have done all season, but thankfully this is always countered by a greater number of genuinely good moments. In short, Game of Thrones continues to justify why it has earned the spot of the most popular show on television.

Game of Thrones airs Mondays at 9pm on Sky Atlantic. It is also available to buy through NOW TV.