Read more
You are at:Home»Culture»Review: 1984 at the Mayflower Theatre
By Annabelle Asker on May 6, 2016 Culture, Theatre
80%
80
Mesmerising

1984 will completely alter conceptions of what a ballet can be. Modern, insightful, and completely absorbing: The Northern Ballet have outdone themselves.

Upon discovering that the Northern Ballet had undertaken the political masterpiece that is George Orwell’s 1984, I was immediately intrigued as to how an art form so graceful and aesthetically pleasing could represent a world that is so brooding and intense. When I think of ballet, I think of classics such as Swan Lake. I call into my imagination beautifully structured gowns, romance, and serene dance moves. Orwell’s novel is quite the antithesis of this, making this staged portrayal an extremely brave undertaking for such a prestigious ballet company.

Set in the remnants of London, 1984 is a dystopian tale guided by the mysterious and all-powerful Party leader ‘Big Brother’. Winston Smith is the protagonist, who works at the Ministry of Truth, yet dreams of rebelling and overthrowing the totalitarian government. His job is to rewrite history: editing facts, figures, and names to better favour the Party. Love and self-made marriage are banned, yet when Winston meets Julia, he puts everything on the line in order to begin an affair that ends in his eventual downfall. Along the way, he learns of love, revolution, and the end of language, through the questionable figure of O’Brien, an Inner Party member. O’Brien and the Thought Police capture Winston in the antique shop which becomes his love nest, taking him to Room 101 for ‘re-education’. 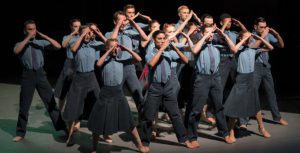 The Northern Ballet have created a show that is highly accessible to a wide audience, sourced from a novel that transcends modern political history in its poignancy. Ballet, merged with more modern dance moves, leads to a show that is both elegant and harsh. 1984 truly left me spellbound, I exited the theatre with my heart beating three times its normal rate. From the moment the curtains opened, I was entranced by dedicated choreography, highly atmospheric orchestral music, and a stage design that just emphasised how cleverly ballet can transform minimalism. The costumes were perfect, styled in a way that was just balletic enough, without overly sexualising a cast of characters that exist in an enforced asexual society.

The dancing was individualised, each performer had their own part to play in creating a larger image. Repetitive, alternating dance moves combined with moveable desks to create a proletariat work-centred atmosphere. Physical contact between dancers was limited until we reached Act 1’s crescendo. Winston’s (Tobias Batley) and Julia’s (Martha Leebolt) love scene in the countryside drew a stark comparison to the rest of the performance, thanks to their minimal flesh coloured clothing and the intensity of their physical contact. It was a distinct reminder that I was indeed watching a ballet, rather than an anti-communist manifesto. They shared a bond in that moment that was poignant, and demonstrated a love story that the Northern Ballet so intensely focused on.

The orchestra was a key element to most of the performance. With such a skilled live band available, the show became truly spectacular. The ingenious use of a repetitive cowbell noise further enforced the concept of control, and the mindless rhythmic work undertaken by the companions. The crescendos reached in Winston’s Room 101 torture scene were fittingly stress inducing, particularly when combined with Tobias Batley’s tortured dancing on stage and the clever graphics of rats on the giant screen at the rear of the stage. Indeed, the graphics used throughout were marvellous, and the inclusion of the screens really added to the uncomfortable feeling of being watched. 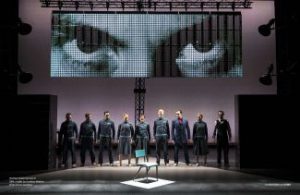 My main concern with the production was its overriding focus on the ‘love’ story between Winston and Julia. Indeed, whether their love is true, or even that crucial to the story Orwell was trying to portray, is ambiguous. For a novel so focused on language and politics, the ballet interpretation left out so much of what many treasure the story for. Without script work, or clear prop usage, so much of the story is lost. Indeed, what assisted me in watching the ballet was forgetting I had read the novel completely, and enjoying it with the artistic license afforded to director and choreographer Jonathan Watkins. At times, the presence of Big Brother felt lacking. It was O’Brien’s (Javier Torres) character who I was most conscious of throughout, his presence was undeniable: building tension and absorbing the audience in the political intensity that Orwell worked so methodically to build.

The dancing was skilled, controlled, and my eyes never left the stage. For around £30 a ticket, The Northern Ballet’s production of 1984 is not one to be missed.

The Northern Ballet’s 1984 was directed and choreographed by Jonathan Watkins. Tickets can be bought here. Mayflower performance dates: 4th-7th May 2016