Death, decisions and drama put the second episode of the series in a whirlwind of landmark events - all leading up to one of the most exciting endings yet.

Bringing the series back to its renowned nail-biting intensity after last week’s frustratingly slow burn; episode two of Game of Thrones‘ sixth season throws so many new storylines into the mix, that it’s hard to know where to start. With death, gore, and enough surprises to keep you reeling until next week’s hit: ‘Home’ offers Game of Thrones’ best qualities – and most importantly, answers the critical questions that have been plaguing us all for months.

And yes – Jon Snow is alive.

Resurrected by the conflicted Melisandre (Carice van Houten); the circle is closed on season five’s haunting final image, as Jon draws breath once more after a superbly timed build up. We watch as the Red Priestess painstakingly washes his tortured body, partaking in a strange ritual of beard and hair trimming – elongating the suffocating tension of whether she has the power to bring back the fan favourite Lord Commander, or if we all really do have to say goodbye to Kit Harrington (no! never!). After some final mutterings and a purposeful shove, Jon isn’t roused by the witch’s ways; leaving the already down-trodden Melisandre utterly hopeless in the face of her lost faith. With her foreign words seemingly unheard by the Lord of Light, she and Jon’s remaining supporters leave the room one by one; only the sleeping direwolf Ghost remaining by his side. After a lingering pause to really make you question Jon’s presence in this series, Ghost wakes up: and with him, a gasping Jon Snow is brought safely back to us – just in time for the credits to roll and leave us hooked for episode three. Such is the way of TV drama. Whilst not totally unexpected, and indeed desperately hoped for by every fan theorist on the internet; Snow’s revival still makes for a true fist-pump moment – as someone finally made it back from George R. R. Martin’s vast and gloomy character graveyard. Ghost’s involvement also brings an interesting theory to light; could the wolf and Jon be more intrinsically linked than we originally imagined?

Elsewhere, ‘Home’ provides little in the way of hope. We finally are reintroduced to Bran (Isaac Hempstead Wright) and his prophetic journey into the north – now with the aid of the ‘Three Eyed Raven’ (Max von Sydow) – where he’s able to control and use his power to discover his family’s past. It turns out that Hodor (Kristian Nairn) wasn’t always so… Hodor, and that the Starks were as honourable and loyal in their youth as you’d expect; providing Bran with a touching reconnection to both his home and his now deceased relatives. This power of his proves to be a useful tool in unearthing Westeros’ somewhat murky past; and will hopefully be utilised further as we progress through the series to reveal plot points in an engaging way – Jon Snow’s parentage, as well as other important factors have still yet to be discovered. 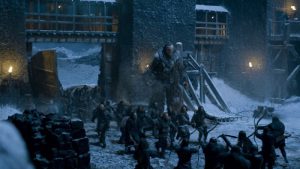 ‘That doesn’t sound so bad,’ I hear you say – well how about a newborn baby and his respective mother being torn apart by trained hounds? Ramsay Bolton (Iwan Rheon) has been let loose again – and has now gone a step further-killing his murderous father and taking house Bolton for his own evil plans. Not wanting to jeopardise his new-found position of power, the hounds were a ‘necessary’ step in ending his father’s lineage and any claims to his seat – which the writers obviously took devilish joy in playing out. Whilst no gory details are shown on-screen, the screams are enough for this particular event. Some would complain that we have enough evidence that Ramsay is a monster, and to further these types of events is just overkill (literally) – turning the show into a thread of shock moments rather than a well-woven narrative. I would argue that whilst this type of violence is extreme; it serves for a sick sense of build up to when Ramsay finally gets his comeuppance. Because he has to have one at some point – and all this adds up to exactly who, when, and how it will be delivered. We can all guess that getting on the wrong side of Walder Frey is a bad idea after season three’s Red Wedding. This scene at least gives some sense of scale to the atrocities that happen in this world every day, as no-one is quite as bad as Ramsay. And no-one is quite as good at being bad as Iwan Rheon.

Back in the capital and with death’s pervasive grip keeping the episode in a stranglehold; we see Myrcella’s funeral – following a sad and resigned Cersei (Lena Headey) being refused entry to the sept; unable to say goodbye to her only daughter. The unbelievably endearing Tommen (Dean-Charles Chapman), one of the few pure and good characters in Westeros, is attempting to regain some sense of power and control as king – trying to protect his family being at the forefront of his agenda. Still young and confused, he goes to his mother to apologise for his mistake and to plea for her help and guidance – something the scheming ex-queen is happy to offer; though this time in a heartfelt, maternal role. After all the pain and trauma she has caused over the span of the show, it’s conflicting as to whether we should pity or suspect her at this point. Only time will tell her true intentions. Meanwhile, over Myrcella’s dead body, Jaime (Nikolaj Coster-Waldau) and the High Sparrow (Jonathan Pryce) wrestle for authority; with the latter winning by a landslide (and a host of religious zealots at his disposal). This provokes a frightening thought, as even the Lannisters have no control over Kings Landing anymore: showing it really is all to play for at the moment. 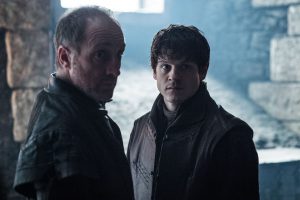 Meanwhile; Mereen sees Tyrion (Peter Dinklage) tenderly face Daenerys’s dragons in order to align them with his cause, and Arya (Maisie Williams) is still blind, begging and fighting for her life against The Waif (Faye Marsay) in the streets of Braavos. This time, another friendly face is brought back from the dead – Jaqen H’agar (Tom Wlaschiha) leads the young Stark down the winding streets of the city, but where to, we can’t be sure. Sansa (Sophie Turner) and Theon (Alfie Allen) part ways, with Brienne (Gwendoline Christie) now the former’s sole protector. The Greyjoys also have some revelations for us however: Balon (Patrick Malahide) is murdered by his returning mad brother, and Yara (Gemma Whelan) has no hold over the throne in the face of Ironborn democracy – leaving another great family shaken and in need of a strong leader.

With so many integral characters killed off, and Jon Snow now alive (whether he is well we shall soon see); there is no predicting where we will be taken next. ‘Home’ is a hard-hitting, shock-inducing, twisting, turning, roller-coaster ride of an episode: and a shining example of why Game of Thrones remains so popular six seasons in.

Game of Thrones airs at 9pm on Sky Atlantic, every Monday. It is also available to buy through NOW TV.