'The Red Woman' sets up the new season nicely, but falls short tonally and fails to answer our big questions

Nobody breathes as the camera tracks into Castle Black, exactly where last season left off – with Jon (Kit Harington) lying dead in the snow. It’s been a long year for Game of Thrones fans.

Let’s get the big one out the way first. At the end of the first episode, Jon is still very much dead. It still feels like an unanswered question, but there’s still a glimmer of hope, with the episode’s eponymous ‘Red Woman’, Melisandre (Carice Van Houten), recounting a vision she saw of Jon fighting at Winterfell, and the Night Watchman’s body still guarded by the good man Ser Davos (Liam Cunningham). But with no sign of Jon coming back at the end of the hour, GoT fans’ desperation is more real than ever – with the growing possibility that we might have to accept that he really is dead. It feels like an injustice, but perhaps we should just accept it and move on. 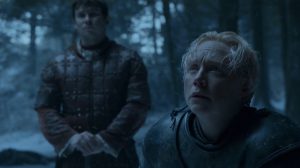 By far the standout scenes of the episode belong to Sansa (Sophie Turner), whose story picks up instantly as she runs from Winterfell with Theon (Alfie Allen). Our hearts are in our mouths and the stakes are so high, with Ramsay (Iwan Rheon) out for blood following the death of his beloved Myranda. It seems GoT is delivering another cruel twist as they are captured – but fear not, Brienne (Gwendoline Christie) rides in to finally do her duty. It’s a genuinely touching moment, as Brienne completes her vow to Catelyn Stark, and Sansa accepts her protection, finally in safe hands.

Despite these shining scenes at the Wall and at Winterfell, the rest of the episode is, at best, forgettable. Probably due to the intense criticism it received, the writers culled Dorne in a bloodbath lasting just two short scenes. While Ellaria (Indira Varma) disposed of Prince Doran (Alexander Siddig), her Sand Snakes killed off his son Trystane (Toby Sebastian). Indira Varma shows off her talent as an actress in her speech (‘Weak men will never rule Dorne again’), but we feel like this is pretty much the end for her character’s arc, unless, of course, Cersei (Lena Headey) decides to rain hell down on her. 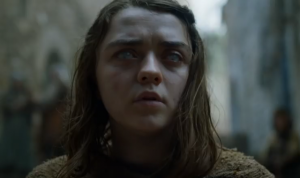 Can Arya (Maisie Williams) please pull herself together? [Image via winteriscoming.net]

After such a Cersei-heavy premiere last season, she barely features this time, bar a reunion scene with her dead daughter’s body and her brother/lover Jaime (Nikolaj Coster-Waldau). Arya (Maisie Williams) needs to pull herself together, now blind and getting beaten up by the Waif (Faye Marsay) on the streets of Braavos. Daenerys (Emilia Clarke) has some interesting but predictable scenes with the Dothraki, and it’s fun to reflect on how far she’s come by forcing her back into the environment of Season One.

Ultimately, the opening episode is always a tough one to judge. It needs to set up the upcoming season, so is often light on those big, impactful GoT moments that we love so much. The most significant twist came in the episode’s closing scenes, where Melisandre was disturbingly revealed to be much older than her beautiful exterior. Though the CGI is excellent, the true magic of this scene is in Carice Van Houten’s performance, as we see this strong, terrifying woman reduced to a faithless wreck.

If this was anything else, I would have given it a higher rating – perhaps even five stars. But knowing the quality Game of Thrones can and regularly does produce, ‘The Red Woman’ fails to live up to many of its predecessors. And I refuse to give up on Jon Snow just yet.

Game of Thrones airs at 9pm on Sky Atlantic, every Monday. It is also available to buy through NOW TV. See a preview of Episode 2 below.