An incredibly evocative and powerful show, American Crime Story is the early front runner for show of the year.

Forget everything you thought you knew about “The trial of the century”.

The People v. O.J. Simpson is a detailed, immersive and gripping depiction of the chain of events sparked by the double murder of Nicole Brown Simpson and Ronald Lyle Goldman on June 12th 1994. The show, which is season one of a new anthology series titled American Crime Story, recounts the case of the number one suspect in the murders, former NFL star O.J. Simpson (Cuba Gooding Jr.). The show presents the story as you’ve never seen it before, chock full of excellent performances, intelligent writing and outstanding direction.

To truly comprehend the show’s excellence, it needs to be judged and viewed in full, this is not a show to dabble in and out of. It’s fortunate then, that it truly hits the ground running with the chilling first few scenes of debut episode ‘From the Ashes of Tragedy’. From this point onwards, the show only escalates, forcefully grabbing your attention and never relinquishing it until the final credits of episode ten, ‘The Verdict’. 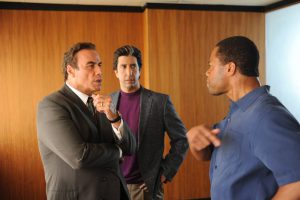 The first few episodes focus mainly on O.J. himself. Cuba Gooding Jr. does a very good job at portraying the clearly dark and challenged star, as he goes through a whirlwind of emotions during the initial events prior to the trial. We are also introduced early on to David Schwimmer’s Robert Kardashian and John Travolta’s Robert Shapiro. Both performances are excellent, making it difficult to root against the two of them as they support a man who appears to be the bad guy in this case. Travolta in particular is almost unrecognizable. 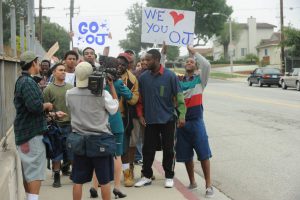 Protesting in support of O.J.

The writing is incredibly clever, as it allows every possible facet of this case to be explored, it is not just a show about murder. The justice system of America is critiqued, the LAPD are scrutinized, the public response to the case is examined and, perhaps most intriguingly, race relations in the USA are explored. In a media circle where films such as Straight Outta Compton and Selma are not afraid to hammer home the issues of race, American Crime Story makes its own mark by detailing the racial claims made by O.J.’s defence team, the people and even the jury, showcasing it all in every fascinating and haunting detail.

As a film student, the way that the show has been constructed leaves me awestruck and makes me almost squeal in delight in some instances; the editing, the cinematography and overall direction is simply stunning. The show oozes with a certain kind of charisma in its direction, featuring incredible scenes, pitch perfect tonal settings and a fantastic aura that will keep you hooked. The writing may be phenomenal but the way that the episodes are put together as an overall whole is just as important. ‘Marcia, Marcia, Marcia’ is an outstanding piece of television and ‘Manna from Heaven’ is the current front runner for best TV episode of the year. Yes, the show is that good. 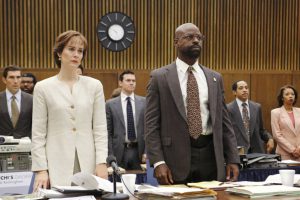 But above all this, we cannot forget the utterly sensational acting. Sarah Paulson is fantastic as Marcia Clark, a truly troubled and wholly misunderstood individual who quickly became one of the faces of the trial as its lead prosecutor. As the focus of the show shifts from O.J. to the trial, Paulson ups her game accordingly. Courtney B.Vance is also excellent as the calculated and dogged lead defence lawyer Johnnie Cochran. He is calm and controlled one minute but vicious and venomous the next. To describe his scenes with Paulson as a butting of heads would be an understatement – the two actors are forces to be reckoned with. Sterling K. Brown slots into the mix perfectly as co-prosecutor Christopher Darden, and is fantastic as the young and potentially in-over-his-head lawyer fighting to convict a fellow African American. Brown’s progression from subdued acquaintance of Cochran, to hot headed and feisty prosecutor is executed to perfection and you can really feel the conviction in Brown’s performance as he comes under immense scrutiny from those outside of the court room.

The show is simply outstanding and I cannot praise it enough. From the acting, all the way down to the aesthetics and how the show captures the atmosphere of the 90s, there is simply nothing to fault here. This is must watch television and it will surely stand the test of time in the way that shows such as The Wire and The West Wing have.

Ladies and gentlemen, the knockout punch of the year has arrived… your move Game of Thrones…