Read more
You are at:Home»Culture»Intro to: Gothic Fiction
By Oli Polhill on April 17, 2016 Culture, Literature

Listen to them, the children of the night. What music they make!

Welcome rosy-cheeked virgins, dastardly marquesses and villainous ghouls. Ever wanted to scream into the leaves of a good book? Well look no further! What follows is a representative run-down of Gothic fiction – a comprehensive list of every Gothic text ever written would be dreadfully convoluted – from the mid-eighteenth century to the present day. Very broadly, Gothic fiction is defined as a mode of literature that conflates fiction and horror in varying degrees: its filmic counterpart, the horror genre, plays on similar principles of eliciting emotional responses to primal fears.

An extreme form of Romanticism indeed, but one created entirely by accident. Gothic fiction was spawned in 1764 with the publication of Horace Walpole’s The Castle of Otranto. In it, he set out to combine elements from the medieval romances, which he considered too fanciful, and the modern novel, which he deemed too confined to strict realism. The resulting text informed many of the generic traits of Gothic fiction, supplying such tropes as the ancestral curse, the foreboding mystery, and labyrinthine passageways. Ann Radcliffe developed the technique of the explained supernatural in The Romance of the Forest (1791), and Matthew Lewis added the basis for elements of severe and acute violence in The Monk (1796), his first and most famous piece, written in ten weeks just before his twentieth birthday. By the turn of the century Gothic fiction was adored by the populace and abhorred by the critics. 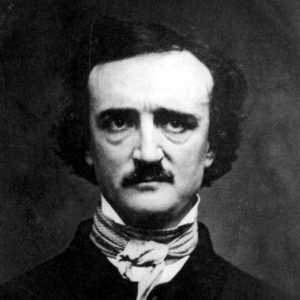 The first decades of the nineteenth century saw further success for the Gothic with novels like Mary Shelley’s Frankenstein (1818), but thereafter and for a large part of the Victorian era, the genre fell outside of the public’s affection, superseded by literary developments such as historical fiction. And yet, it was these decades that saw the rise of some of the most influential and surprising contributors to the genre. Chief among these was Edgar Allan Poe, whose exploration of the psychological impacts of traditional Gothic effects in stories like The Fall of the House of Usher (1839) became seminal for later works. The Brontë’s too, inspired by authors like Radcliffe and Clara Reeve, brought about developments in the Female Gothic. They did this by analysing the woman’s entrapment within dominating patriarchal structures in their various novels, most notably Wuthering Heights (1845 – 46) and Jane Eyre (1847). 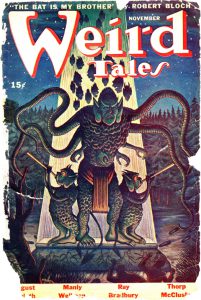 The most famous period of Gothic literature is the fin de siècle, in which texts like Bram Stoker’s Dracula (1897), Robert Louis Stevenson’s Strange Case of Dr. Jekyll and Mr Hyde (1886) and Oscar Wilde’s The Picture of Dorian Gray (1891) wowed audiences. Following these, the elements of the genre became widely disseminated through several mediums. The aforementioned horror film began to take off at this time, and American pulp magazines such as Weird Tales reprinted classic Gothic tales as well as modernised stories adhering to the same broad principles. H. P. Lovecraft and his protégé Robert Bloch wrote what many consider to be the final Gothic tales, forerunners to the modern genre of horror fiction, from the 1930s to the 1950s.

So, how can you tell if the book you’re reading is Gothic fiction? There’ll be tyrannical and/or hypersexual men, fainting virgins, useless clergymen and a witty young hero. Expect creepy castles and monasteries, ruined mansions and foreboding forests too: the setting of a Gothic tale is a character in itself, a decrepit backdrop that enhances the other elements of the text. Instances of extreme emotion are manifested through awe, terror, fear and trauma, in association with various expressions of the supernatural, be it a ghostly visitation or an out-of-place dagger. In a nutshell, Gothic fiction should make the reader feel uncomfortable by presenting them with apparitions, abominations, and abnormalities.