Read more
You are at:Home»Culture»Thomas’ Tirades: Everybody’s gone to the BAFTA and every BAFTA’s gone to the rapture
By Thomas Davies on April 12, 2016 Culture, Video Games

The British Academy of Film and Television Arts are a British institution. As such, they quite clearly have a strong duty and obligation to celebrate British gaming achievements. And as demonstrated countless times before, they rigidly stand by this duty, often in spite of the quality of whatever they are awarding with accolades. Yes, the BAFTA Game Awards aired this Thursday evening, and two games in particular stole the show. Her Story, a genuinely thoughtful and interesting experiment, pulled off fantastically by relative newcomer Sam Barlow, and Everybody’s Gone to the Rapture a…. game(???) by The Chinese Room.

Both of these, according to the BAFTA committee, are shining examples of the very best in British gaming, but neither are quite as good as Batman: Arkham Knight apparently. Everybody’s Gone to the Rapture received awards for best Audio Design, Best Soundtrack and Best Performance. This means that the description of the game as ‘The Archers meets Armageddon’ takes on a whole new level, as you realise that BAFTA evidently confused it for a radio play.

Her Story, a title that places emphasis on performance and audio design as an intrinsic part of its gameplay, won awards for innovation, best mobile/handheld, and, deservedly, best debut. As fans all know, game designer Sam Barlow has been working tirelessly for the Best Debut award, ever since his first game in 1999. 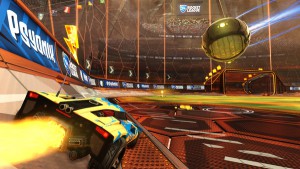 Rocket League also performed well, deservedly receiving awards for Best Multiplayer, Best Sport Game and Best Family Game. It also has the distinction of having the highest amount of wins for a game that wasn’t also nominated for Best British Game, clearly indicating that rocket-powered cars playing football is a universal language.

Until Dawn made off with Best Original Property, which will seem like a big joke in 3-4 years when we’re playing Until Dawn V: Revenge of Dawn. We also saw Artistic Achievement going to Ori and the Blind Forest, for being the only nominee that did anything that could actually be considered artistic, and not just a regular game. Meanwhile, Bloodborne made off with best Game Design, which it probably deserved to win. I just wish I could figure out what ‘Game Design’ is supposed to
actually mean.

Life is Strange won the award for ‘Best Story’, a decision that BAFTA will find to have consequences, while Prison Architect won best ‘Persistent Game’, presumably for still somehow being called a new release, despite coming out four years ago.

BAFTA also awarded the Fellowship to the grandfather of first-person shooters, John Carmack, lead programmer of absolute classics such as Doom, Quake, Wolfenstein and… uh, Rage. Carmack proceeded to give a kick-ass speech, promised us some cool VR tech and made off into the night like the renegade engineer that he is. We were then treated to Best Game, and despite Everybody’s Gone to the Rapture being nominated, the British Academy managed to restrain themselves momentarily and give the award to Fallout 4. Bethesda’s representative gave an incredibly humble speech, before literally falling off the stage, and now despite having won an award for making the best video game in 2015, that pratfall will forever be Bethesda’s legacy. This cannot be undone. 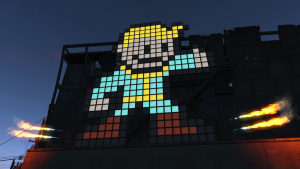 All in all, the BAFTA Game Awards were an entertaining watch. The hosts were clearly selected because they knew their stuff, and were just as excited to see who won as the rest of the audience. It was nice to see game designers and artists getting the recognition that they deserve, without having to stop every five seconds so that we can have more game promotions and Mountain Dew adverts. In fact, the only moment that wasn’t focused on giving awards to games and game personalities, was dedicated to promoting young fledgling game developers, and fostering new creative talent.

While the BAFTA committee definitely have some iffy standards, it’s very clear that they are one of the few award committees that have a vested interest in seeing the game industry grow and develop as an artistic institution, and not as some vessel to sell and to advertise. It’s a sad sign of the industry that they have to be commended for doing something as simple as ‘taking an interest’, but in BAFTA’s defence, not only do they do it, but they do it well. Apart from when they’re handing out, like, fifty awards to The Chinese Room.