An expertly crafted episode that stumbles at the final hurdle, 'Last Day on Earth' gave us the emotion and terror we were looking for, just not in the places and ways that we were expecting.

‘Last Day on Earth’ was a lesson in two things: how to perfectly build tension, and how to absolutely undermine it. The season finale was expertly constructed. The taut scripting, and the effortless balancing of the episode’s two main story-lines, produced what I think was some of the best television I have ever seen. But then there was Negan.

I had heard a lot and read a lot about Negan; any Walking Dead fan unavoidably has. His first appearance, the moment that the season has been building towards for sixteen episodes, is the stuff of comic legend. So what a disappointment it was when he came bumbling out of an RV with his baseball bat and a bunch of painfully clichéd bad-guy lines, right down to the ‘eeny, meeny, miny, moe’. Not only was he clichéd, but his comedy completely undermined the emotional gravitas of the scene. And let me stop you right there- I don’t care if that’s how the scene played out in the comics. This is an adaptation that has time and time again followed its own path, and quite defiantly so. The graphic novels are no longer an excuse. How did no one in the writers’ room object to this tonal mish-mash?

I’d heard a great deal about Negan’s incessant use of creative profanity in the source material and while I was expecting nothing from the notoriously swear-sensitive AMC, it was still hugely disappointing to have this psychopath limited to ‘shits’ and ‘pricks’. If they were going to censor him they should have done it absolutely. Giving us a few little ones here and there just feels patronizing and, quite frankly, absurd within the context of what is happening. It’s an argument as old as good TV, but how is it that everybody’s okay with showing a bloodied and beaten man hang from a freeway overpass, but a few fucks are just too far. I’m a jaded twenty year-old and some of the things this show has done still stick in my mind. But swearing? Are you insane?

So, to the subject of the last minute. Whose fucking idea was this? Seriously, I want a name, or names. To build so brilliantly to a climax, a legendary climax grounded in one of the most popular comic series of all time, and then utterly screw the pooch for… for what, guaranteed viewership? Some big numbers for the season seven premier? Shame on you, whoever you(s) are. All of the fantastic work put into the preceding fifty minutes, some of the best work we have seen on the show thus far, was shorted by a cheap cliffhanger.

But I don’t think we should let those few awful minutes and that one dreadful, most likely executive, decision overshadow what was a fantastic- no, horrifyingly beautiful- episode of television, delivered by a cast and crew at the tops of their games. Melissa McBride and Lennie James anchored a powerful parallel to Rick and his group’s attempts to get to the Hilltop and its doctor. The pair perfectly sold Morgan’s first kill, and his meeting with a couple of body-armoured survivors held the hope that was so relentlessly missing from the RV’s journey.

The RV convoy’s attempt to reach the Hilltop was half an hour of a bunch of heads banging against a wall made out of cultish sociopaths, led by Grand Theft Auto V’s Steven Ogg, giving a much more subtle and dynamic performance than is his MO. Every time the RV came to a stop, my heart was in my throat. The shots of tens of dark and still Saviours waiting on the roads were utterly terrifying. 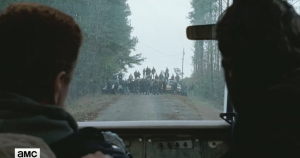 And even in the face of such a poorly executed antagonist, Lincoln and co. held up their end and should be commended for that. Their desperation was tangible and difficult to stomach. Indeed, the group’s helplessness was compellingly built up throughout the episode as they moved from blockade to blockade, from numbers to even greater numbers- from Alexandria, to the roads, to Negan’s circle in the woods.

I can’t and won’t let one terrible decision, however crucial, get the better of what was honestly one of The Walking Dead’s best episodes; perhaps its all-time best, because of its tension, because of its emotion, because of its power. An awful couple of minutes doesn’t reverse the fact that when Eugene and Abraham said their goodbyes by the RV, and hugged all their conflicts away, I cried. And it takes a lot to make me cry at this point.

With all that in mind, and against my better judgement and the outrages of the fans I can already hear marching upon AMC’s headquarters, I’m going to give ‘Last Day on Earth’ a score of four stars. See you in October.