A well-intentioned, but incredibly boring and uninspired game, Dreii might appeal to fans of physics-puzzles, but to non-masochists, it's a bog-standard affair.

The road to hell is paved with good intentions… Oh, and physics puzzles.

Etter Studios are an interesting anomaly in the gaming world. Not a game development company, but instead a multimedia company, with a focus on advertising campaigns and interactive projects, Dreii is the fourth game by Etter, and functions as a sort-of sequel to their first big indie game project Drei.

And, despite several hours of gameplay, that’s still all I really know about it. ‘Is it a good game, Tom?’ I… guess? I don’t know. I just… I don’t know, okay?

‘Does it offer the challenge and frustration that are now standard for indie puzzle games?’ Absolutely!

It’s very boring. It’s so boring. And the problem is, I can’t quite place what it is that specifically bores me about the game. It could be the fact that it’s a game based on physics puzzles. Physics engines were introduced to gaming in 2004, and twelve years later, I’m becoming increasingly sick of the fact that game developers and gamers alike can’t seem to get over it. I’ve played physics puzzle, after physics puzzle, after physics puzzles, even in games that aren’t based around their physics engines! And now I encounter a game that has a central mechanic of stacking things on top of things and making sure that those things don’t fall over. I just don’t think I can take this anymore!

But… then, as I said, I was addicted to the game! Despite yawning, and rolling my eyes, and generally wanting to find something better to do while playing it, I did still manage to clock several hours into Dreii, and I wish I could blame that on my obligation to review it. But, it was a boring addiction. It wasn’t a game that left an impression on me. It wasn’t one of those games where I get a sudden urge to go back and play it, it was a game that I could barely remember only five minutes after putting the controller down. But, it was still a game that I could play for several consecutive hours, and not think to myself ‘I should just turn this game off and play something different’.

So, maybe it’s not the physics puzzles. Though those are tacky, oversaturated and a staple of indie games that I’m very keen to pull out, I’m not sure if it was really my problem with this game. It could be the aesthetic? My eyes were burning by the fourth hour of trying to stare at a blank white screen with a bunch of generic boxes. It’s cool if developers want to go for minimalism, but nothing exciting happens on the screen… I think, ever? I’ve not finished the game, but it seems like ever. I’m not, by the way, saying that every game has to have explosions, and action, and vistas and stuff. I’m saying that the game doesn’t even change its fucking colours apart from when it wants to indicate that we’ve reached the end of a ‘world’. It’s just white screen, creepy multi-coloured blob-creatures, and black and white boxes. There’s just enough activity on the screen to rate it above watching paint dry, but even that depends on the colour of the paint you’re using.

Again, this could just be some pettiness on my part. I mean, I guess it’s stylistic? A dull, overly-minimalist style, one that causes severe eye-strain and prevents the game from ever actually appearing ‘interesting’, but a style nonetheless. And, as I said, occasionally the game changes up its image, if only to give the illusion that this particular level of ‘stack the bricks up’ is any different to the previous several levels of ‘stack the bricks up’. Fine, whatever, I’ll drop it.

‘What about the gameplay?’ Good question, the gameplay is actually interesting. I mean, I was ragging on physics puzzles a couple paragraphs ago, but I’ll hand it to the game, its execution is somewhat novel, even if there is no substance to back it up, and that’s kind of the problem? See, the gameplay is good for a game that’s central concept is picking up boxes and putting them on top of other boxes. In the ‘picking up and putting down boxes’ genre, this game stands head and shoulders above the rest, for at least it adds a game mechanic that makes this somewhat challenging, if a tad frustrating. See, you can’t just pick up a box, and stick it on top of another box. You have to drag the box, from a line, as it swings, to and fro, on top of the other box, and make sure that you don’t knock over any boxes while doing so.

And this is initially, and surprisingly, appealing, even if you will turn your nose up at it when you’re first introduced to it. But, that’s it. Apart from a few ‘special blocks’ and new surfaces that you’re introduced to later in the game, that you’d think would make for a more interesting game, that’s kind of where the game begins and ends. You do that for 40-50 levels, win the game and then brag about the fact that, of all your friends, you are the best at putting boxes on top of other boxes. It’s cool, it’s quirky, and it’s interesting, but I still don’t know if it’s good, and I’ve been playing for several hours! And believe me, I wish I could give a real verdict on it, mostly so that this review doesn’t go live as the completely unstructured mess that it is, but I… I can’t. I actually can’t. Well done, Etter Studios, you may have made a slightly mediocre game, but the amounts of self-doubt and confusion you have plagued me with are enough for me to call it an outstanding art piece. 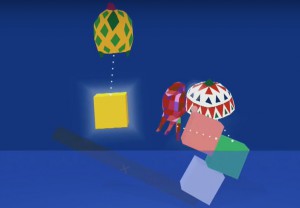 Well, you would have. But I found a smoking gun, see, Etter Studios spent a lot of time marketing this game on its multiplayer capabilities, both online and local, and allow me to take this time to tell you that they are both utter crap. Local multiplayer was so ill-thought out and obviously forced in, that it may as well have not even been included. Instead of allowing players with two controllers to control two different Eldritch Piñatas, both of your controllers play the same one. An idea that sounds interesting in theory, but—Actually, you know what? That doesn’t even sound good in theory! Etter Studios, what were you thinking? Online multiplayer is also shoehorned in, you can do most of the levels singleplayer, and the few that require multiplayer don’t require it because the puzzles are designed with co-op in mind, but because the developers just rehashed singleplayer levels with slightly heavier blocks. I didn’t get a lot of time to play around with the online multiplayer, so I’m prepared to be told that I’m wrong on this one, but even so, I don’t see it adding much to the game.

Dreii is a game with good intentions, and I really don’t want to attack Etter Studios too much, as a lot of love clearly went into making this game, especially for such a small development company who don’t even specialise in games. At the same time, though, I don’t feel that I can encourage the attitude that quirky-looking, boring physics puzzles are something a game development can trot out without giving the game something any more substantial than that. I’m not saying Dreii needs story, or character, or huge flashy lights or whatever, I’m saying that Dreii needs to offer something other than just some physics puzzles, as it’s currently 2016 and that level of simplicity unfortunately no longer suffices.

Maybe I’m being elitist, maybe I’m being snobby, but maybe, just maybe, Etter Studios could have made something that made me go ‘Wow’. This is a company that made a game about racing cars on Google Maps, I know that they have the potential do this. I want to see another game by Etter Studios, I really do, but I want them to go into that game with a desire to take risks. Dreii has definitely bumped Etter Studios onto my ‘ones to watch’ list, but it’s definitely not a game I can see myself recommending to anybody except people in extreme rehabilitation programmes.

Dreii is available on PlayStation 4, PS Vita and PC.