Read more
You are at:Home»Culture»How to Fix: Family Guy
By David Mitchell-Baker on March 18, 2016 Culture, Television

It really is crazy to think that 2016 marks the 17th anniversary of Family Guy.

17 years of the Griffin family redefining the words ‘dysfunctional’ and ‘crazy’. 17 years of Seth MacFarlane’s crude, edgy and no holds barred humour. And 17 years of ardent fan support.

Despite being cancelled by Fox in 2003, Family Guy made a triumphant return in 2005 after attaining big ratings for re-runs on Adult Swim and huge DVD sales. It has since become a tour de force comedy show, with its return episode ‘North by North Quahog’ (a parody of the Alfred Hitchcock classic, North by Northwest) being viewed by almost 12 million people.

The show has spawned a huge number of highly quotable lines, hilarious gags, controversial episodes, a campaign for ‘Surfin’ Bird’ by The Trashmen to get to Christmas number one, a Hollywood career for Seth MacFarlane and a highly forgettable spin-off, The Cleveland Show (highly forgettable except for ‘Straight Outta Stoolbend’).
However, since the end of season 10, the show has begun to lose its edge and has taken a dip in quality. Is the show bad? Not necessarily. Has it lost its edge a bit? Definitely.

More importantly though, can it be fixed? Yes, and here’s how…

So in season 12 we were ‘treated’ to the episode ‘Vestigial Peter’. This was an episode about a lump on Peter’s neck that turned out to be his vestigial twin. Said lump then won over the approval of Peter’s family and friends because of his optimism… Wait what!?! 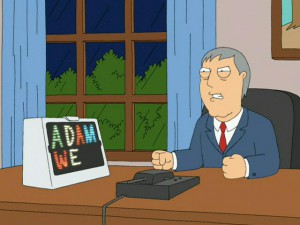 Okay, Okay. Yes, Family Guy is meant to be bonkers; this is a show about a family with an atheistic talking dog who smokes pot and has an alcohol problem and a possibly homosexual, British sounding baby. They live in a town which features such characters as ‘Greased Up Deaf Guy’, a sexual predator called Quagmire, an elderly paedophile, Mayor Adam West (yes, that Adam West) and of course frequent visitor, the immortal James Woods (after whom the local high school is named). Oh and did I forget to mention that every couple of seasons Peter has a fight of Michael Bay-esque proportions with a man sized chicken?

What was I talking about again? Oh that’s right, something about a talking neck lump. 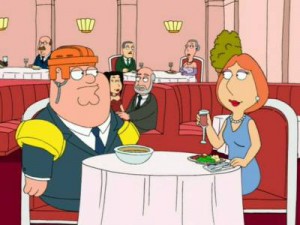 So I’m not necessarily suggesting that we can’t have silly stories, just make it so the humour can work within them. If you think of some of the best Family Guy episodes, there’s a good half and half split between the stories being absurd and more realistic.
In ‘Petarded’, Peter discovers that he is, scientifically speaking, retarded, in ‘Emission Impossible’ Stewie panics over the fact that Lois and Peter may have another child, and in ‘Love Thy Trophy’ Spooner Street argue over a prized trophy, all relatively simple stories.
But contrast those narratives to ‘Peterotica’, in which Peter writes an erotic novel (which was still probably better than Fifty Shades of Grey) and the audio book version of it then causes an injury to a driver, resulting in a lawsuit against the publisher, Carter Pewterschmidt. Then there’s ‘Petergeist’, in which the Griffin household is haunted by a Poltergeist that abducts Stewie, and of course the only way to save him is to travel to the ghost dimension, the entrance of which just so happens to be Meg’s bum.

Absurdity can work, but so can realism. A balance needs to be struck to allow MacFarlane’s humour to really shine.

2) Share round the jokes and alleviate the reliance on Peter. 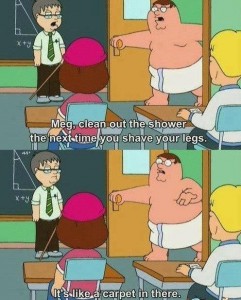 Just one of Peter Griffin’s many great moments.

So admittedly, Peter Griffin is the main character of Family Guy and has probably been the most consistently funny character over the show’s history. A lot of the show’s funniest lines come from him and he is often key to many gags.

However, there is such a thing as over-exposure and that is what MacFarlane is starting to do with the character. Now I’m not saying that he’s not funny anymore, far from it, but the over reliance on Peter does mean that he often gets the best and worst lines of an episode, leading to fans souring on the character slightly. This is a simple problem that could be easily fixed. It would be good to see Lois, Chris and Meg get more jokes in, or be the crux of more of the humour. Meg’s humour itself has begun to go from playfully innocent banter about no one liking her to full on angst, abuse and near hatred jokes. This should change immediately.

3) Keep the Griffins in line with their original characters.

Think back to the beginning of the show (or the first episode you saw) and think of who the Griffins were; 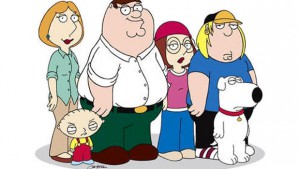 The Griffins, in all their early glory.

Peter: The dumb and irresponsible dad.
Lois: The more level headed, but sometimes crazy, mum.
Chris: The dumb son.
Meg: The try hard who no one liked.
Brian: The wise cracking, intelligent voice of reason.
Stewie: The evil baby who wanted to take over the world.

Think of what the characters have become now; Peter and Chris are largely the same, Lois’ character and humour has gotten darker, Meg (as I said earlier) now has really dark stories and is arguably treated worse than before, Brian is now a sex pest, and Stewie couldn’t care less about taking over the world and seems to now just let slip that he might be gay.

This is a far cry from what the characters once were and their changes have coincided with this dip in quality. Rarely do I find Brian or Stewie to be funny anymore, they’re only aided by the funny episodes that they are at the centre of (‘Yug Yilmaf’, ‘Back to the Pilot’). Meg is now too dark to be taken in a funny and more lighthearted way, Lois and Chris just seem to be… there, I guess… Peter is the only character that MacFarlane has ever had a firm grasp on.

4) Cut down the pop culture references and make them less forced.

Cutaway gags have long been a staple of Family Guy and many of the best jokes come from them. The content of these gags varies from a character’s personal experiences in the past, to allusions to something someone might do (be it ordinary or obscure), or a pop culture or historical references.

Classic cutaway gags include Alan Rickman’s answering phone, Canadian Alcatraz, the Will Smith rap, the Cheetos Cheetah and his drug addiction, and the incredibly meta cutaway about cutaways.

Now this isn’t to say that these are detriments to the show, however MacFarlane’s modern day pop culture cutaways don’t hit quite as hard as they used to. A lot of the times these feel forced and the jokes fall flat.
Not all modern Family Guy pop culture humour is ineffective (just check out the Griffin family trip to the Teen Choice Awards for proof that MacFarlane can still pull it off), but the jokes just need to be tempered a bit and revert to a more natural use.

Now this could well be a move being suggested 4-6 years too late but Family Guy damn well, bloody well, abso-freakin’-lutely freakin’ needs a movie!!!

Back in 2012, Seth MacFarlane turned his eye to writing and directing a feature length film and brought us Ted. The movie, marketed heavily on MacFarlane’s name and association to Family Guy, performed well above expectations both critically and commercially, earning over $540 million worldwide and scoring a solid 68% on Rotten Tomatoes. The titular character Ted was essentially Peter Griffin and audiences loved him. Speculation was rife that the studio would soon move forwards with a Family Guy movie and the show was arguably at its peak of general popularity at that point, but no confirmation came and still nothing solid has materialised.

However, MacFarlane’s next cinematic follow up A Million Ways to Die in the West did not fare so well, earning only $87 million at the worldwide box office and 33% on Rotten Tomatoes and Ted 2 followed this trend, making under half of the original’s worldwide gross and reaching only 46% on Rotten Tomatoes. 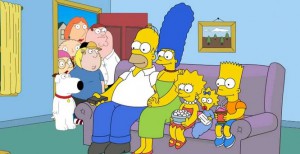 Many are saying that MacFarlane’s popularity with the general audience has waned (his Oscars hosting gig didn’t go down well with a lot of people either) but could a last ditch effort of Family Guy: The Movie save Seth’s bacon? Just look at The Simpsons, the show often seen as Family Guy’s inspiration. Many thought that the show was on a downward slide, its overall quality and popularity sinking, but The Simpsons Movie was a mega hit with both audiences and critics and many say it helped the show itself and gave it a much needed jolt of momentum.

So could a Family Guy movie do the same? It’s seems to be now or never for Seth.

Oh, and please do a crossover with Rick and Morty at some point.