Read more
You are at:Home»Culture»Review: Chicago at The Mayflower Theatre
By Georgia Simpson on March 8, 2016 Culture, Theatre
80%
80
Sensational

Sassy and sexy! The new touring production of Chicago is definitely one jazz filled musical, you should not miss!

For the next five nights Southampton will be transported to the dark under world of jazz and murder at the Mayflower Theatre, with the arrival of the latest touring production of Chicago.

Set in the jazz era of the roaring 20s, Chicago oozes sass, sex and smart mouthed, seductive women! The show tells the story of bored housewife Roxie Hart, who dreams of singing and dancing on the vaudeville stage, only for her to be sent to the Cook County Jail for shooting her lover who promised her her big break in show business. Among the inmates on murderess row is one of Roxie’s idols and star, Velma Kelly, one half of the infamous jazz act The Kelly Sisters. Kelly supposedly killed her husband and sister after witnessing their affair, but denies it all due to state of shock and fear. The two form a love-hate relationship which sees them placed trial to trial under the advice from extortionate lawyer, Billy Flynn.

Roxie is fabulously played by ex-Coronation Street star Hayley Tamaddon, who uses Roxie’s humour and abrasiveness to increase her sex appeal. She may be sassy and sexual, but it is not intimidating in the same way that relative newcomer Sophie Carmen-Jones portrays as Velma. If Roxie is likeable, Velma is fierce and fiery. Carmen-Jones is extraordinary as Velma, with all the perfect facial expressions that makes you believe she is really the Queen of Cook County and Chicago in general. When the two pair up, for the final number, a reprise of Velma’s ‘All That Jazz’, it is something very special; fun, sensual and extremely well performed. 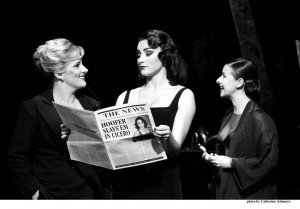 John Partridge for his role as Billy Flynn leaves a little to be desired. From our seats in the stalls we could barely hear his voice in his big number ‘Razzle Dazzle’. His vocals blended too well with the ensemble, to the point where it was lost, perhaps a more powerful voice would be more suited to the role of the sly lawyer.

As there is no set design, there is only the band playing live on the stage for the audience to see. Due to their lack of scenery or props, the band help set the jazz scenes as do the dancers, whom should be highly commended for this production. They play an integral part of the performance.

Overall,  Chicago is a fantastic show with show-shopping musical numbers that will be stuck in your head for hours after seeing this production!

For tickets contact The Mayflower Theatre Box Office on 023 8071 1811 or book online at mayflower.org.uk