Ah, it’s all coming together nicely, isn’t it? We’re at episode 5, and after an awkward meeting (see my review of episodes 1 and 2), time spent considering whether to reply to a text or not, and a wild party, we are finally at Gus’ (Paul Rust) big date. But hang on: it’s not with fellow protagonist Mickey (Gillian Jacobs), but with her quirky Australian roommate Bertie (Claudia O’Doherty) instead. There’s a twist.

Now, if you remember, I’m sceptical about whether Mickey and Gus are a match made in heaven, or even if they are the titular ‘love’ in the series. But if one thing is clear, there’s no love forming between Gus and Bertie. Gus is a depressive cynic with a dry wit, making him a complete contrast to Bertie’s eternal optimism and kooky sense of humour. Their date is a car crash – Gus kills the mood by worrying too much about the loud people on the nearby table, or the draft from the ceiling, or their waiter, who is ‘too friendly’. Anybody would think Gus was British he’s so awkward. 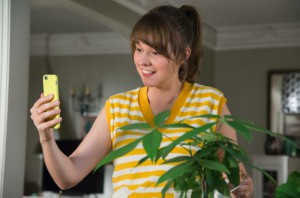 Bertie (Claudia O’Doherty) is a bad match for Gus

It’s not long before a bored Mickey begins meddling with the disastrous date via text. The Mickey scenes this week are basically a monologue for Gillian Jacobs, who manages to get the balance between comedy and serious drama just right. Mickey wrestles with her many addictions in a comic but believable way, rearranging her furniture, and arranging her books by colour. In comparison, Gus isn’t quite as well written or performed by Paul Rust, as he seems to have very few actually endearing characteristics. He’s needy, annoying, and sometimes downright unpleasant and rude. It’s difficult to see why Mickey would fall for him, but in the episode’s biggest twist, she seemingly does.

After the end of the date, Gus grumpily sulks about the fact Mickey set him up with Bertie, rather than dating him herself, and she responds in a way that surprises both him and the viewer, running out in front of his car and then passionately kissing him. For me, the best thing about Love is its unexpectedness. It twists and turns and you never quite know what’s going to happen next. On one level, this can make it seem sloppily written, lacking a ‘finesse’, but on the other hand it’s more realistic. Relationships and love never unfold in quite the way to expect them to – just like this unexpected gem of a television show.

Love Season One is available to stream on Netflix.