American Truck Simulator is an unforgiving and difficult game with the potential to please the most committed of gamers. For casuals players though, it's a road to ruin.

As a driver myself, I am deprived of the pleasures of the open road whilst at university. The diversions, crushed badgers and red lights. Life’s great joys. But here to fill that gaping void in my life is American Truck Simulator.  This truck based simulation is like a Picasso painting; jagged and perplexing, but something which I presume I am meant to respect.

The environments of SCS Software’s game are vast and traffic permanently circulates throughout them with intelligent A.I, although I think my laptop had some issues rendering this world, so the landscapes didn’t look quite as glossy as in the trailers and gameplay videos. After choosing an avatar that I deemed to possess the necessary degree of psychopath, it was time to select a name for my trucking enterprise. I opted for a subtle blending of “truck” into an otherwise expletive phrase and was then good to go. At this point I assumed that I would be given the keys to my own truck, garage and team of slovenly men. I was wrong. 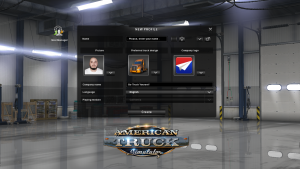 This, like so many games on Steam, is a simulator. This means that I had to start out driving other companies’ trucks to try and scrape together enough pennies to buy my own. And herein lies the problem. American Truck Simulator is very difficult. The game actually has steering wheel support but I assume most users will be using a mouse and keyboard. With this in mind, the controls are very poor. Forced to use the directional keys, it can be hard to actually keep the vehicle on the road when cornering, particularly at speed. Manoeuvres in and out of facilities at the start and end of any job often see you clattering into walls and barriers.

Of course, these challenges are part of the simulation. But the result of such scrapes are heavy repair costs, and when complimented by the severe speeding fines that you will inadvertently pick up (if you’re as impatient as myself), you will be left in a hefty amount of debt. This has sustained consequences for your game, as the further into debt you go (and trust me, you will), the further the keys for that shiny red truck slip from your hands. I feel like there is a definite need for a slightly more forgiving set-up for newbies.

SCS proudly note the fact that you can stream your own choice of radio stations in the game. However, this requires some ability with coding (I don’t have this) in order to actually embed links for these channels into the game’s script. Tricky stuff. I settled for the already present Beatles Radio. 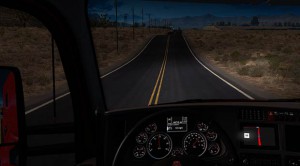 In fairness, the simulation is pretty accurate. If I were put behind the wheel of a truck then I would undoubtedly wreak similar amounts of carnage. Driving down an open freeway with your headlights glowing does have a calming effect and this is undoubtedly part of the game’s appeal. Less in key with this though, is the manner in which your debt continues to rise. The game’s loan function is there to help, allowing you to borrow money from the bank at a cost. But this leaves me with a burning question; why would you want such stresses when playing a videogame? Indeed, when you can drive trucks whilst simultaneously firing machine guns in Grand Theft Auto, what’s the point in playing one where you have to stop at red lights and indicate before making a turn?

Nonetheless, in no other game can I tow a ventilation shaft to Fresno then awkwardly manoeuvre into a small parking space with the psychedelic tones of ‘Strawberry Fields Forever’ permeating in the cab. That really was a trip too far.