Read more
You are at:Home»Culture»The Edge Reviews the Classics: To Kill A Mockingbird by Harper Lee
By James Barker on February 19, 2016 Culture, Literature
100%
100
Brilliant

Harper Lee's 1960 classic is a must read which teaches important moral lessons, but also captivates with high drama.

I wrote this article two weeks ago, as a simple trip down nostalgia lane, and as a suggestion of a book you could read. But we at the Edge decided to publish it early, due to the sad news of Harper Lee’s passing today (19th February) at the age of 89. This is a tribute to the author of my favourite book of all time – and it’s not a case of a book you could read, it’s a book you should read.

I first read Harper Lee’s enchanting classic To Kill A Mockingbird as an uninterested 13 year old student, who would much rather spend his time in the English classroom chatting rather than reading. Introduced by our teacher as ‘the best book’ she had ever read, I still wasn’t grabbed. In fact, even upon reading the book for the first time, I was impartial as to whether or not I liked it. 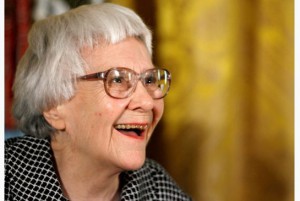 Then, the night before an assessment, when I had no choice but to stop procrastinating, I actually sat down, book in hand, and absorbed myself into the text. I was all of a sudden captivated by a heartfelt coming-of-age story, with three dimensional characters, and a moral code that still strongly influences the way I act today.

Let me introduce you to the Finch family of Maycomb, a small, prejudiced town in the deep south of America. Scout is our fiery, young and mischievous protagonist, as well as the youngest daughter of the family. She is particularly fond of creating mayhem with her older brother Jem, in ways that are typical of childhood. The pair are raised by their father, the highly respected lawyer Atticus. They remain in the bliss of middle class normality, until Atticus makes the controversial decision to defend a black man who is accused of raping a white woman. Scout and Jem subsequently learn about racism and what it means to do the right thing, as they witness the unfairness of Tom Robinson’s trial.

The novel does start out a little slowly, which might put readers off initially (I know that the overcomplicated tales of how the Finches arrived in Maycomb bored 13 year old me), but when you get to the core, it’s a book that you simply cannot put down. The suspense of the twists and turns of Robinson’s trial keep you gripped, and at points crying out in frustration. Scout is a refreshing narrator, and her innocent perspective perfectly articulates just how cruel the town’s racial prejudices are.

We see Jem grow from a boy to a man, but the real hero of To Kill A Mockingbird is Atticus Finch, who risks everything to help a man who is already condemned. Atticus is destined to fail in his plight, but that doesn’t stop him from doing what is right, putting his principles first. In my mind, this makes him the most inspirational character I’ve ever come across in a book.

If there’s one classic you read this year, I would ardently recommend To Kill A Mockingbird. It’s easy to read, not too long, and teaches good moral lessons for you to carry with you throughout life. Though I didn’t realise it straight away, I’m in agreement with my English teacher; it’s the best book I’ve ever read.

To Kill a Mockingbird by Harper Lee was published in 1960.