Read more
You are at:Home»Culture»How to Fix: The Walking Dead
By Tash Williamson on February 17, 2016 Culture, Television

The Walking Dead has shocked and delighted viewers since 2010. Adapted from the graphic novels of the same name (created by Robert Kirkman), the show enjoys a loyal fan base who have inherited it through reading the comics, or by watching that unforgettable first episode. Unwilling outcasts of a recently non-existent society, the characters struggle to survive in the wild against the zombie threat, whilst also trying to maintain a sense of humanity, and a semblance or society.

However, the first half of season 6 has been somewhat underwhelming. With the next half now finally airing, treatment must be sought fast to cure its many ailments.

If you haven’t watched The Walking Dead up until the first half of season 6, but would like to (seasons 1 to 5 are a real treat), please walk away now.

Disclaimer: This article is written by someone who has had no contact with the graphic novels.

Sadly, there was no way Rick was making it onto the crowded Jester’s dance floor tonight

The Walking Dead has gone to a lot of places but it’s never gone ‘bigger’. A massive in-your-face zombie horde just seems too crude and obvious a move. No one has forgotten that zombies exist, or that they are a constant threat. The fact that they initially couldn’t be seen added a suspense that has now been lost to the presence of the masses. Much like in a horror movie when you actually enter the ghostly realm and are surrounded by the monsters, the threat here has become far less scary. This storyline is simply tiresome and predictable; watching Daryl, Sasha, and Abraham driving around for several episodes isn’t exactly what I would call entertainment.

There are too many slow episodes where nothing really happens. Characters may sort through their emotions, have an epiphany, or write messages from beyond the grave, but sometimes it feels as if we are meandering along like a zombie horde ourselves, aimlessly consuming without thought or agenda. The balance between zombie killing action and DMCs (Deep Meaningful Conversations) has become decidedly weighted toward the latter. Although abstaining from violence makes you all the more appreciative when it does occur, the rarity of these scenes has now become a diagnosable problem that leads to viewer disenchantment and boredom. This is especially true for those who are watching for the zombie battles, rather than the characters battling with their consciences.

3) Kill off the new characters. 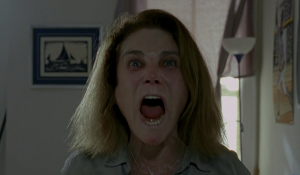 Aren’t you a zombie yet?

Instead of slowly feeding us new characters that we acclimatise to over a season, like Michone, we have been thrown in with a whole new bunch of people that, on the whole, no one gives a shit about. These anonymous characters litter our screens, from the boring Alexandria citizens, to the savage group of outsiders marked with the letter ‘W’. All you can do before an episode starts is hope that it features a character you actually like, doing something other than riding a bike around for an excruciating amount of time (excruciating for both the viewer to watch and for Daryl to perform). Killing Deanna was a step in the right direction, but there are definitely a few more zombies to be made yet.

4) Have the guts to kill off major characters.

For six whole seasons we have been watching the group dynamics alter and everyone react to Rick’s development as a man, a father, a widower, and a leader. Maybe it’s time to see how the group would change if Rick was no longer there, because despite their differences, and any decisions or actions that Rick commits that they may not agree with, it is unavoidable that they will always return to him. I mean, it’s Rick fucking Grimes, who the hell wouldn’t? He has survival instincts that make him bite into the major blood vessel of a man’s neck, so that he can save his son from being raped and his friend from being beaten to death (hands down the best scene in the entire series). Although each character has been tested, the ultimate test would be surviving without the show’s hero.

However, Rick Grimes is (and always will be) the best thing about The Walking Dead, and obviously his death wouldn’t mean getting rid of Andrew Lincoln. He would have to appear in visions, flashbacks, or flash forwards, with an adult Karl (Lincoln), looking eerily similar to his Dad, surviving with a new group of people, Judith in tow. 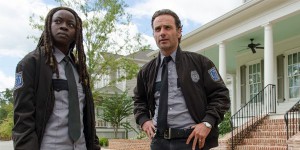 Never fear, ‘No ball games’ is strictly enforced in Alexandria

Although admittedly Alexandria has been a good storyline, it has now become mundane, very much like the civilian life the group is being made to lead. Alexandria as a concept worked well as the group was no longer defined by their survival skills, but by their humanity. Much the same as with institutionalisation within prisons, the group could only survive on the outside. Suddenly, Rick’s position as their war leader came under question when they were trying to live in peacetime.

The cliffhanger we are left with is promising. Alexandria is no more; they have the chance to escape the banality of ordinary life. Yet something more needs to happen. The threat posed by the ‘Wolves’ is imminent, but their lack of humanity reveals their true nature as glorified ‘Walkers’. Some old-fashioned cross-country zombie killing is required, or a radical discovery, like a cure (for real this time) or a shady government facility where the top 1% have been living.

The treatment may be extreme, but The Walking Dead has been running for six seasons. Breaking Bad ran for five. It was inevitable that that show had to end, but this ensured it ended on a high (pun definitely intended). The Walking Dead is not so lucky; it could potentially go on for years and deserves a better fate than that.