Sarah Lancashire propels yet another series of the dramatic Happy Valley.

It’s been nearly two years since the famed Happy Valley aired its first series to huge critical acclaim. Snapping up a bucket load of awards, it really was the ‘flavour of the month’, and the commission of a second season was inevitable. However, due to writer Sally Wainwright’s heavy writing schedule (she also pens the hugely successful Last Tango in Halifax and Scott and Bailey, to name a few), and pinning down an all-star cast, it took a while to appear. But despite its break, the moment lead star Sarah Lancashire sauntered onto screen as steely cop Catherine Cawood, I found myself filled with excitement.

It’s a largely new story, but it feels like the same show, purely because of the unique and darkly humorous vibe. It’s quite unlike anything else on the BBC, juxtaposing a dark story with genuine laugh out loud moments. At one point, Catherine can be seen chasing a flock of sheep, and in the following scene she discovers a decomposing corpse in a garage. Happy Valley is truly a mix of genre; a mismash of drama, comedy, soap opera, and even full-on-horror at points. 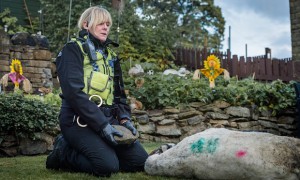 As I mentioned, the new season kicks off with Catherine discovering a body in a garage, a killing that is seemingly unrelated to the first series’ kidnap plot. It soon transpires however that the body is one of the kidnapper’s mothers, That kidnapper is none other than Catherine’s sworn enemy, Tommy Lee Royce (James Norton, a big name at the moment thanks to War and Peace).  The spine-chilling Royce sulks in a prison cell, but as a viewer I even felt a pang of sympathy when he is told of his mother’s death, news which clearly devastates him. He is visited by a clearly obsessed woman, played by Shirley Henderson, who later shows up in the Valley, watching Royce’s son from outside in the pouring rain.

Also joining the cast is Downton Abbey‘s Kevin Doyle, who plays a detective on the case, and Scott and Bailey‘s Amelia Bullmore as his spurned lover. Harry Potter‘s Matthew Lewis, complete with shaggy beard, drives a van past a group of prostitutes Catherine is speaking to, hinting that he will become a suspect in the serial killings at some point. As it’s Happy Valley, we aren’t supposed to trust anybody. Due to the large cast of this series, some characters, such as Matthew Lewis’, have very little screen time, but they are sure to be developed over the coming weeks.

The series opener feels a bit rushed tonally at points, but ultimately holds a lot of promise for the coming weeks. Above all, Sarah Lancashire continues to shine as Catherine, who has the perfect blend of wry wit, intense fierceness, and inner darkness. Sally Wainwright is a brilliant writer, but above all she knows her characters, and just who should play them. I can’t wait to see where Happy Valley twists and turns to next, but I’ll be sitting on the edge of my seat, that’s for sure.

Happy Valley airs at 9pm Tuesdays on BBC One, and is available for a limited time on BBC iPlayer.