This new production is good fun and Jason Manford is the real MVP, but some technical problems cause Chitty Chitty Bang Bang to fall short of greatness.

For the next week, The Mayflower Theatre presents a new national production of the beloved musical Chitty Chitty Bang Bang. The show features a star-studded cast including Jason Manford, Martin Kemp, Michelle Collins and Phill Jupitus.

Loosely based on Ian Fleming’s 1964 novel and the musical film adaptation starring Dick Van Dyke, Chitty Chitty Bang Bang tells the story of eccentric inventor Caractacus Potts and his children Jeremy and Jemima. When the children beg their father to buy an old rotting car from a junkyard, he does whatever he can to make the money needed, including creating a new type of sweet and inventing a haircut machine. Once in his possession, Potts transforms the old dilapidated car into a beautiful and fully-functional race car, which they name Chitty Chitty Bang Bang, due to the sounds that it makes.

The new production of the musical stage show is good but not great, it definitely needs a few tweaks. In the performance that I saw there were multiple issues with the car on stage; the inflatables did not come to life when Chitty saved the family from drowning on the beach, one of the wings did not pop out when Chitty was flying in the sky, and a rouge wheel on the car kept going up at random points in the performance. That being said, it was only their second live performance, and these things can easily be corrected before the production goes on tour. 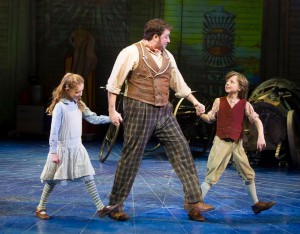 Manford with Kent and Sherman (Image via The Mayflower Theatre)

Even when putting technicalities aside, there are other issues. The production relies heavily on projections to help set the scene and tone of the performance. This is disappointing, as part of the narrative is that Potts encourages the use of the children’s imagination when playing, as he cannot afford to buy them new toys. The use of the projection takes away from this, as well as taking away from the audience’s imagination. Part of the theatregoing experience comes from the use of imagination when props and acting cannot create a grand spectacle. By using projections to give the impression of the car driving, the production takes away the audience’s use of imagination and just makes it look cheesey and forced. It is disappointing and detracts from the overall performance.

Martin Kemp’s Childcatcher character is more creepy than scary. He is verging on the role of a pantomime villain, due to his lack of stage time and discernible presence when on the stage, which was a shame, as the role is meant to strike fear into the hearts of children.

Jason Manford is the surprising MVP of the production. Firstly, it was a shock that he could sing, dance or even act, as he is a well known stand-up comedian and presenter, rather than a musical performer. Once over the initial shock, Manford as Potts was a very enjoyable watch. He had perfect comedic timing, which was to be expected, but he inserts this into his singing ability as well. He certainly adds an extra tone of humour to the more upbeat numbers. He manages to hit every note, including the low ones that Van Dyke often struggled with. Manford also has great chemistry with the children played by Henry Kent and Lucy Sherman. The scenes shared between the three were heart-warming to watch, as were Manford’s interactions with love interest, Truly Scrumptious.

Overall the production is good fun and contains great choreography, with the latter being especially notable in the big ‘Me Ol’ Bamboo’ number in the first act. However, the use of projection over imagination, the technical faults, and the pantomime villain stop this show from being an overwhelming success.